As November 3rd nears, I’ve found my Facebook feed inundated with friend requests from men who apparently just now have realized how overwhelmingly attractive I am. I’m tempted to believe the bullsh*t and might have to let Angelina Jolie know that her days as a Hollywood sex symbol are numbered.

As tempting as it is to respond to these trolls with some snarky comment I simply scroll on by hoping that they won’t become despondent over my lack of interest. A male friend of mine said he’s been getting a record number of friend requests from women, so maybe my friends are as delightful and attractive as I am. Birds of a feather, you know.

I posed this question on a Facebook page that deals in words and usage, grammar and the evolution of the English language. It’s one of my favorite Facebook pages; although, I’m often reluctant to pose a question because some of the respondents are language snobs.

One would hope that those who follow the page would be helpful and courteous, and most are, but there’s always one negative Nellie or Neddie who feels the need to disparage others for their questions or misunderstandings.

My question today was well-received, and I had some great answers. Most said that they used the menu as their ordering cue. I’m attempting to work the term into dialogue in a book, so I didn’t have a menu on hand; although, now that I think of it I could always google a local wine bar’s menu to see how it’s listed. Duh!

One person, though, told me to always include the word “board”; otherwise, they’re likely to just put the meats and cheeses on the table or even in one’s hands. I felt certain she was joking, but then a couple of others said the same thing. Really? surely this isn’t a thing. And if it is, ewwww.

I’m running behind this morning. It’s 7:50 on this Tuesday morning. There’s a dental appointment scheduled at 10 a.m., clear across Tallahassee, and I’m not even close to being ready. In fact, I’m still in bed scrolling through Facebook and wondering what in the world I could post here.

Then, this comes along.

It made me giggle and inspired me to get up and get ready to see the dentist! These teeth aren’t going to clean themselves.

Recently I took part in a silly Facebook game wherein one learned how Southern one might be based on the number of traditionally southern foods one has eaten.

Not to brag, or anything, but I scored 25 points, making me Sho’nuff Southern. Some of the foods listed I tried just for the heck of it and never indulged in them again–namely shrimp and grits which I find disgusting, unlike cheese grits which can be divine, and chicken livers–a delicacy my mama loved and insisted I sample. All I have to say is ewwww.

My daughter noted that fried okra, our very favorite southern food was missing from the list. We made an executive decision to include it and awarded ourselves an extra point for having enjoyed this most wonderful of foods.

Only in the south can one take a vegetable and render it simultaneously delicious and unhealthy by breading and deep frying said vegetable. We do it with squash, as well. Oh wow, I guess fried squash needs to be on the list, too. One more point for me!

I’m fairly adventurous when it comes to foods, or was until I embarked on a plant-based diet, but there are certain foods on the list that I have not and can, with a certain amount of certainty say, will never eat, including redeye gravy, liver mush (!), and pickled pigs feet. I shuddered just typing them.

What foods are typical of where you live? I know I tried haggis when I visited Scotland, and enjoyed scones with clotted cream in Ireland. Mainly there I had the beer, though. That’s an international food I can support wholeheartedly.

Something I liked or clicked on or posted a comment about on Facebook resulted in the following suggested item showing up in my social media feed: 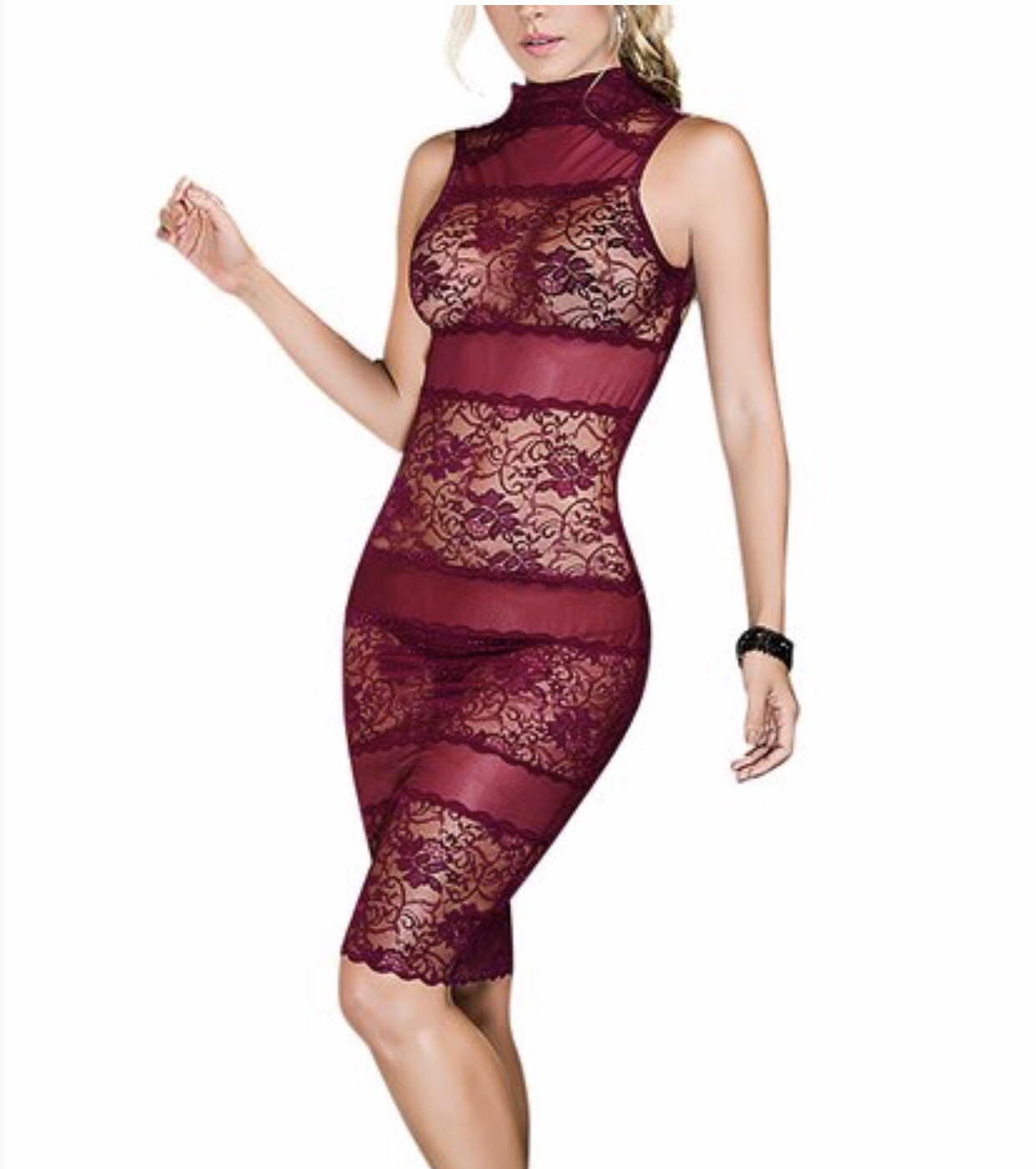 Now, I have a couple of questions. First, is this dress meant to be worn as lingerie? The model is sporting a watch. To me, that’s an indication that she doesn’t want to be late for an upcoming appointment outside of her home.

This leads to my second question. Is this appropriate attire for church? I guess I’ll find out soon enough. I might need bail money.

Who’d have thought a lifelong adventure in love and laughter could have begun at a Piggly Wiggly store? I guess Studly Doright and I had a pig as a matchmaker. 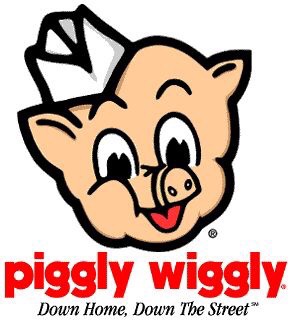 I first posted this piece in 2014 and had forgotten about it until a long time friend tagged me on a facebook post that mentioned Piggly Wiggly. I commented on the Facebook post and the author “friended” me. It looks like the pig is still bringing folks together.

One of my long-time real life friends wrote this piece and posted it on Facebook. I took the pledge and hope that you will, as well. Thanks, Jim for making a difference. Here’s the pledge:

This political season, I am taking the Meme-Free Pledge, abstaining from sharing any political meme on social media. Like if you approve, Share and substitute your name for mine if you wish to join me!

WHEREAS: There is broad agreement that American democracy is under attack by foreign adversaries by means of spreading misinformation (propaganda) in order to create anger, fear, and mistrust, and

WHEREAS: Some of the adversaries’ most effective weapons in this effort to spread misinformation are memes shared through social media, and

WHEREAS: It is often difficult to know the source of these memes,

I HEREBY PLEDGE to assume that any political meme I see has been planted by America’s adversaries, and therefore, I will not share them, neither in public social media, nor private. This includes secret groups to which I belong and private messages.

I FURTHER PLEDGE to push back against these attacks on American democracy by exposing the misinformation, and if the misinformation is especially egregious, I will report it to Facebook or other social media formats.

I ALSO HUMBLY PLEDGE (this is the hard one for me) in my clarification of misinformation, I will do so with only sourced facts, without emotion, doing my best to avoid insulting or demeaning the poster, using language to the best of my ability that will not sound like a sneer or put down. (This is the hardest part, but the most important.)

Leslie Noyes with thanks to my friend, Jim Lovell, whose post I’ve borrowed.

Americans are fairly naive when it comes to propaganda. Oh, we know that advertisers employ techniques that make us want or even “need” certain products, and many of us recognize the moves that politicians use to gain our support, but when matched up against the Russian propaganda machine we are дети. Babies.

As Americans, we don’t like to admit that we aren’t number one in every category, even though we never really were, despite popular myths to the contrary. That doesn’t mean we aren’t still a great nation, it just means that the world has many bright spots. Thank goodness!

In the arena of generating political propaganda we lag far behind Russia and always have. I have to think that’s why we are so susceptible to it, as well. We have to become better informed.

I’m no militant. I’m a 61-year-old grandmother who does not want to see the country she loves fall under the spell of soulless oligarchs. Don’t fall for the “bandwagon” techniques being promulgated by the Russian-backed #WalkAway campaign. Don’t be a tool.

Here’s a handy guide to propaganda techniques. I learned about these in a high school English class, and I thought everyone knew about them. Apparently not.

Peace, people, and don’t be swayed by propaganda.

My need to create art is overshadowed only by my complete lack of artistic ability. Almost daily I’ll see something on Pinterest or on Facebook that makes me think, “hmmm, I can do that,” only to discover that no, I can’t. But that seldom keeps me from trying, and subsequently failing again.

One day last week I found this video on Facebook:

It looked foolproof, so I gathered a sketchbook, some paints, and a bit of embroidery floss. Guess what? Not only is it foolproof, it’s great fun.

My first attempt. I love that I get two prints in one go.

I tried two colors on my second piece. I’m calling this one “Angry Parrots.”

And three colors on my third. The black just looks muddy, though. 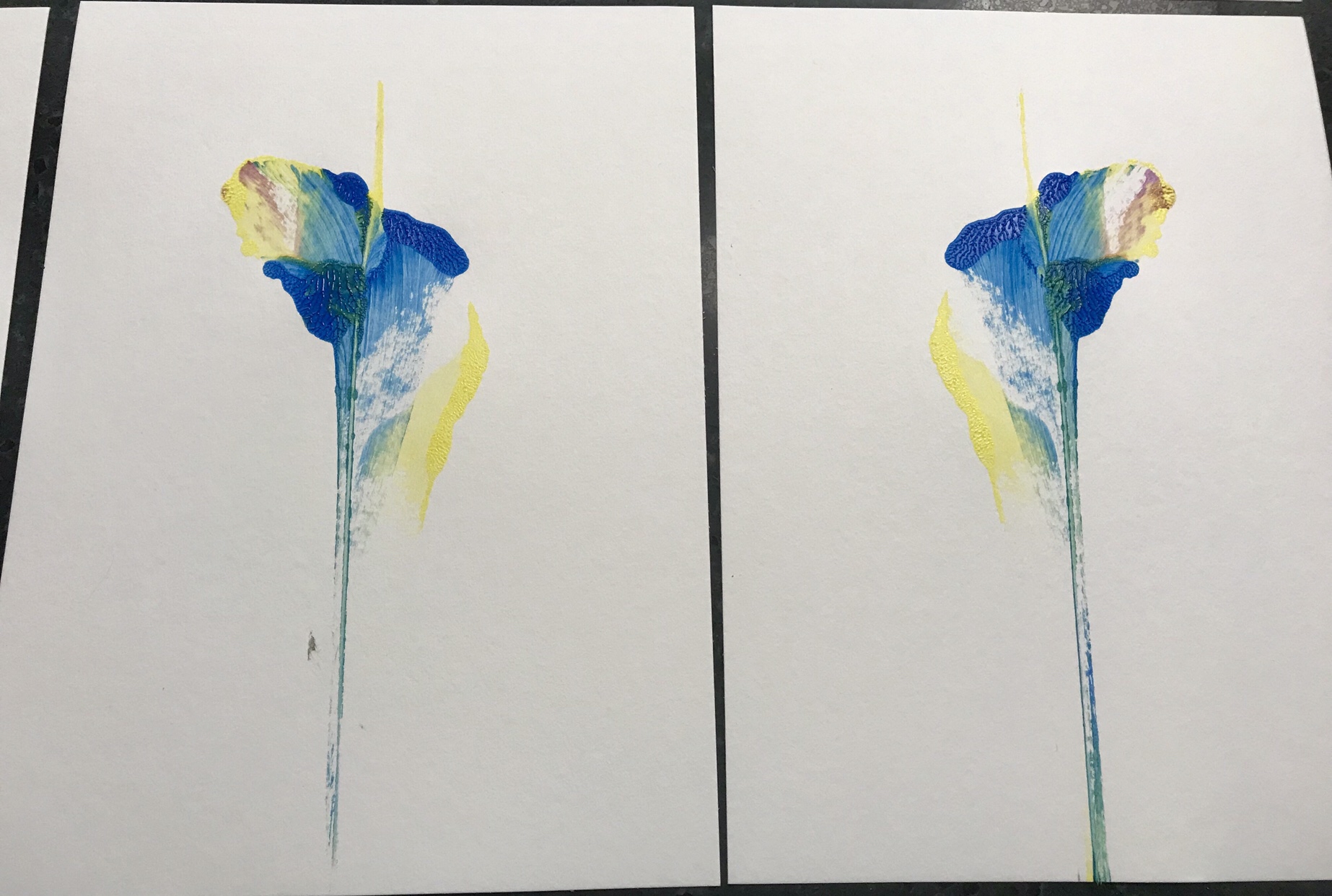 This will be fun to do with visiting grandkids. I used washable paints, and all my work surfaces survived unscathed. Yay, me!

I won’t be opening a gallery any time soon, but I am going to keep experimenting.

Earlier this week my mother-in-law, Saint Helen, called to let us know that her beloved brother-in-law, our Uncle Junior, had passed away. Junior was one of the best men I ever met. He always had a smile and a story to tell. Every Sunday he’d call Saint Helen and they’d share their week’s adventures. Even in his last years Junior would be out on his large property in Oklahoma tending to chores that would be daunting to much younger men. He was quite a man.

I also lost a friend I met in a Facebook group of political progressives, and while we never met face to face, Thom’s death hit me hard. He was a retired Methodist minister who lived a life of service to others. His heart was huge and his sense of humor kept us all on our toes. He shared his beautifully written prayers with us along with his calming and deep wisdom. Even in his last days he was posting puns on Facebook to cheer us up. The world has lost a great man.

Then just this morning I learned that a friend from my hometown was hit by a car and killed. I hadn’t seen Roy in years, but he was like a big brother to me when I was in high school. He had a big personality and an even bigger heart. I’m so sad for his family and for all who knew him. Another good guy gone.

Life is short. Hug your loved ones, cherish your friends.