Our oldest grandson and I spent a day at Universal Studios and Islands of Adventure in Orlando last Wednesday. A single day to do both parks justice didn’t seem feasible, but we made it work by purchasing express pass tickets and hitting all the rides we knew we wanted to ride.

The day began with rain! Such a bummer! But we got in the express pass line for the Minions ride and got out of the weather quickly. It wasn’t one of our “must” rides, but it served the purpose of keeping us dry and warm. The same was true for the Jimmy Kimmel ride. They were both fun, but not really what grandson Garrett was looking forward to on his first visit to Universal.

The rain slacked off somewhat, but the day was much colder than we’d expected. We stopped in a shop and I bought a hooded sweatshirt and we both got lanyards to keep our tickets and passes safe from the elements before heading into Diagon Alley.

Here’s Garrett outside the unassuming entrance to the magical world of Harry Potter:

Much to his embarrassment I asked complete strangers to take a photo of us in the middle of Diagon Alley. I told him he was going to get used to me being an extrovert. I’m not sure he ever embraced it, though.

He sort of thinks I’m nuts. He’s not wrong.

We stopped into Gringotts,

and we rode the Hogwarts Express:

We drank butterbeer once we arrived at Hogsmeade: 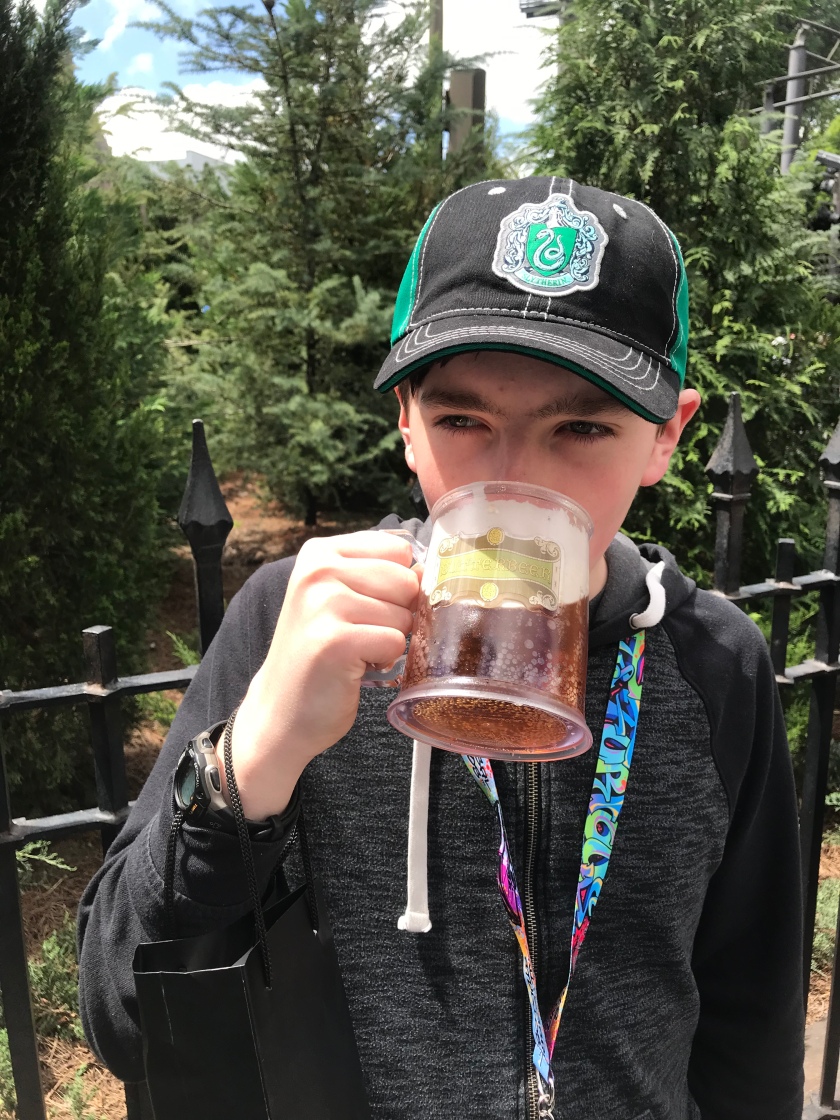 We rode spectacularly produced rides in the World of Harry Potter. They’re such a great mix of roller coaster action and film that reality gets all contorted by fantasy and you feel you really are dashing about a Quidditch field or escaping from Gringotts. One’s senses are confused and delighted in so many ways. I giggled and screamed in the same breath.

Hogwarts Castle was an amazing sight.

We ventured to many other parts of Universal and Islands of Adventure, taking on mummies and assisting Spiderman, but The Magical World of Harry Potter was the highlight.

Garrett and I had a blast. Okay, I had a blast, and I’m fairly sure he did–he’s not quite as extroverted as I am. (Note the Slytherin hat.)

One evening during the grandkids’ visit we sat around the dining room table playing a game of Risk. The two older kids and I were locked in a heated battle over the Congo, a territory that changed hands roughly 20 times during the course of the evening. Total world domination depended on taking and keeping that spot.

The youngest grandchild, six year old Harper, was an eager onlooker and rolled the dice for me when I had to take clothes out of the dryer or refresh the snacks.

Apropos of nothing between turns, Harper said, “Nana, I really love your lights over the table.”

“Yeah. I really like your chandelier,” Harper said. “It’s so decorative.”

After a couple of beats Harper said, “I sure hope you die soon.”

“Harper!” The horrified teenagers said in unison. “Don’t say things like that!”

I just giggled. “Harper, I hope it’s not too soon. My death would keep us from going to Sea World this week.”

“Well, I really want the gems in the bathroom, too.”

“You know, the ones you use to turn the water on and off.”

“Whoever buys the house will get all that stuff,” I said.

I guess that settles everything.

(Harper’s house has much nicer fixtures than mine does. I’d gladly trade her, and perhaps be granted a longer life.)

The grandkids are safely home in Illinois after spending a week with Studly and me here in Florida. Our time together was much too short, and now Doright Manor is quiet again.

I’m kind of exhausted after spending a full day with grandson, Garrett, at Universal Studios and Islands of Adventure on Wednesday and then getting up at 2:30 a.m. on Thursday to get them to the airport on time. I’m taking the lazy way out and just posting photos of our week with the kids. 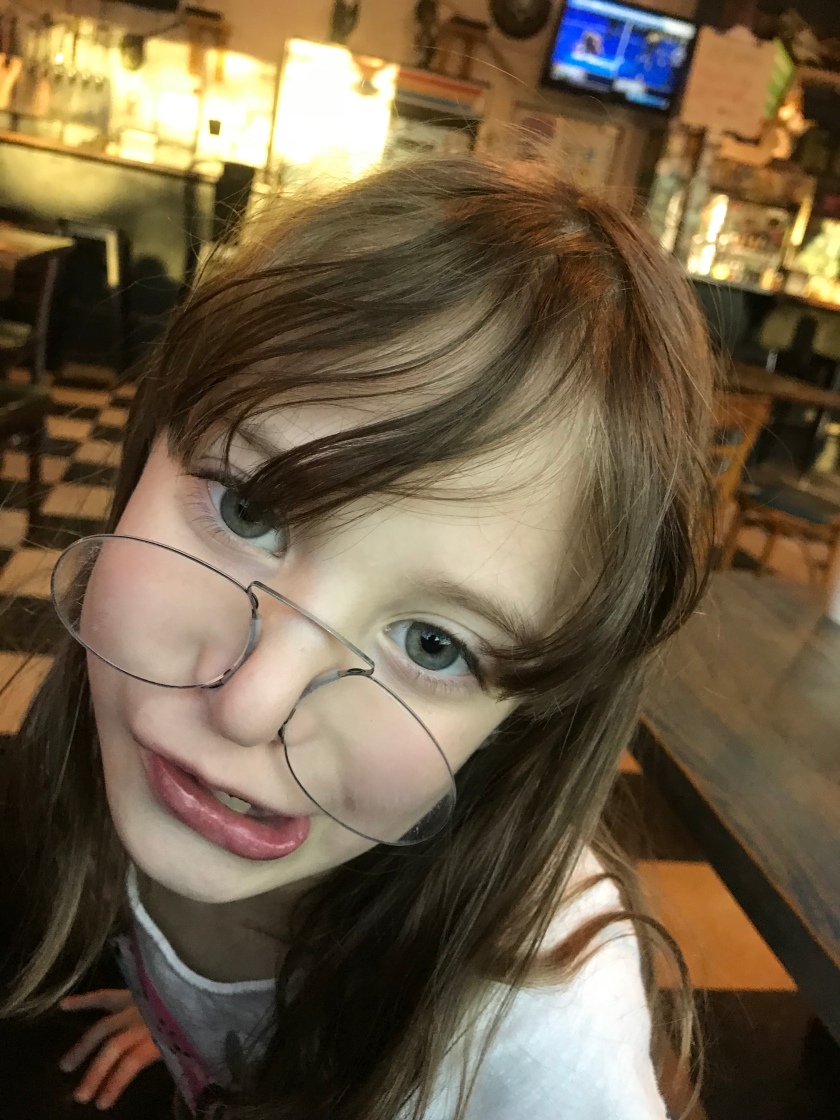 McKayla, above settles into the Texas bedroom.

We went to a showing of Captain Marvel:

And talked about upcoming movies

Garrett chopped down a tree so that we could relocate the fairy house displaced by Hurricane Michael. 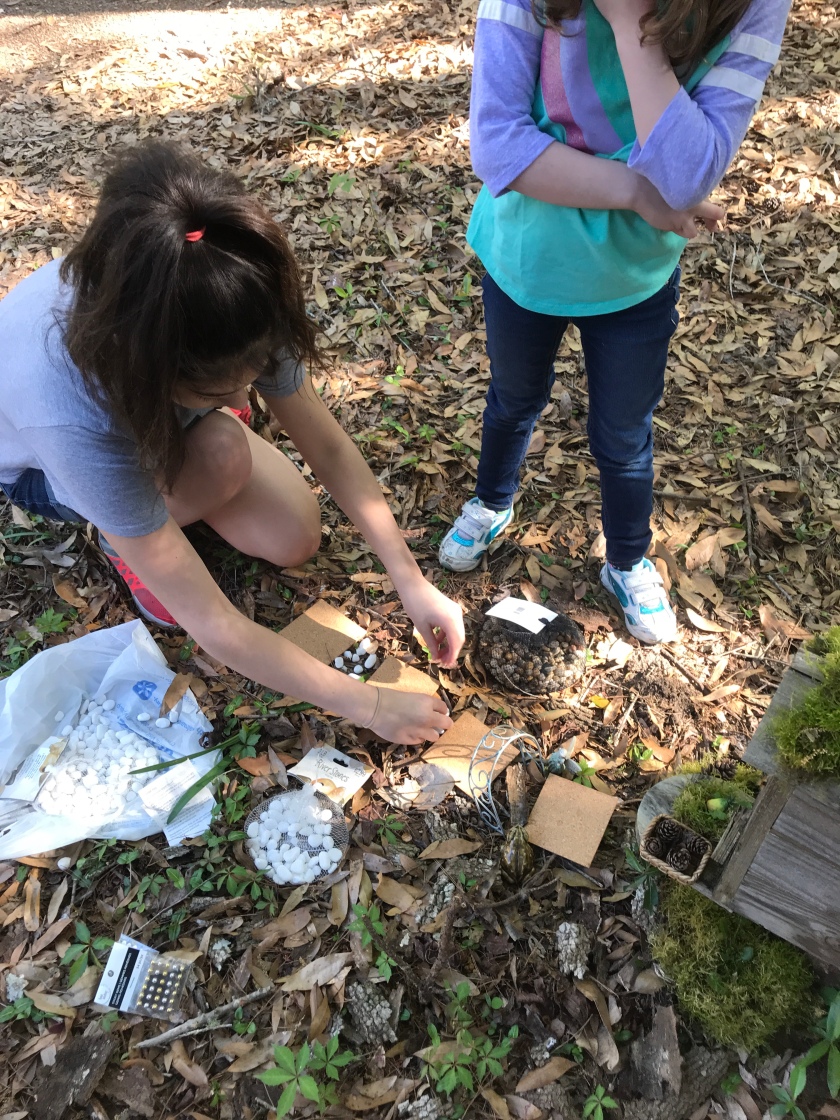 McKayla and Harper made the fairy house a welcoming place once again.

We played several games of Risk. I didn’t win even once. It seems that I’m lousy at games involving strategic thinking.

McKayla piloted the riding lawn mower around the yard, collecting fallen limbs and other forest detritus, including her sister.

We enjoyed a beach day at St. George Island: 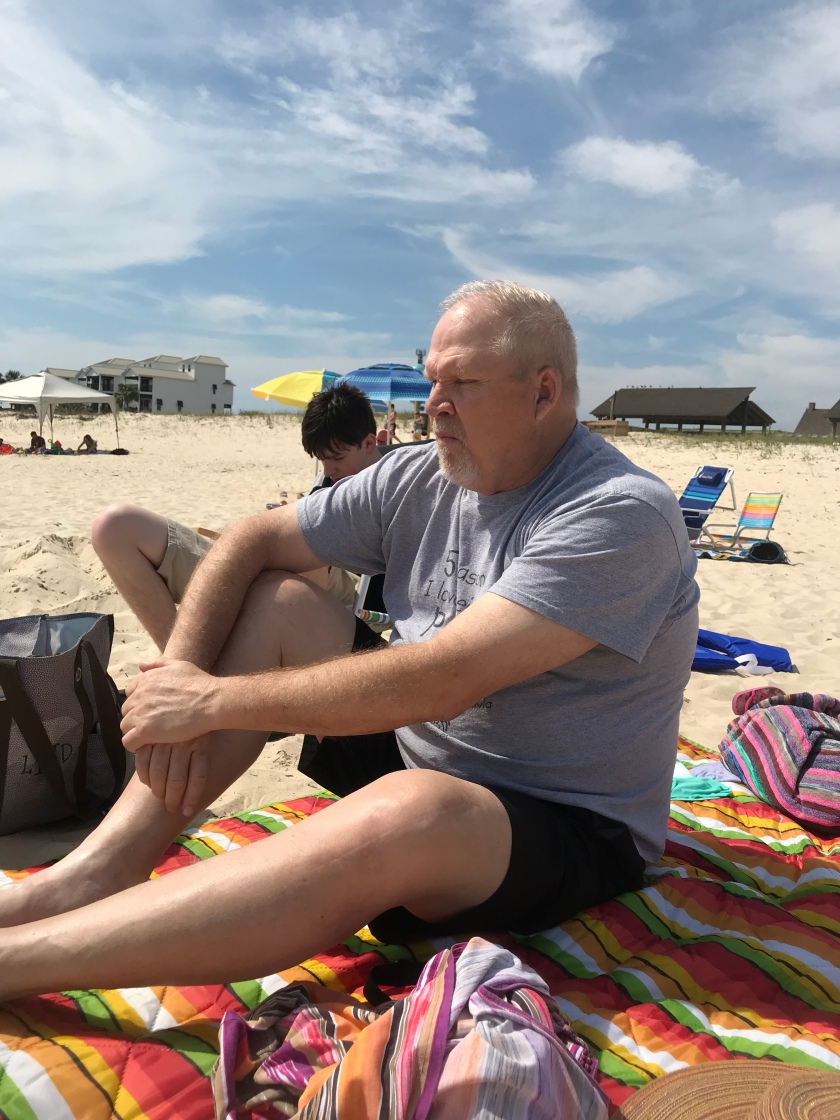 Well, some of us enjoyed it. Studly and Garrett just tolerated the beach.

The girls had our nails done:

On Wednesday we packed up and left Doright Manor for Orlando. While there we took a tour of Full Sail University so our tech minded grandson could satisfy his curiosity. He was impressed, and now has some work ahead of him in his last two and a quarter years of high school. 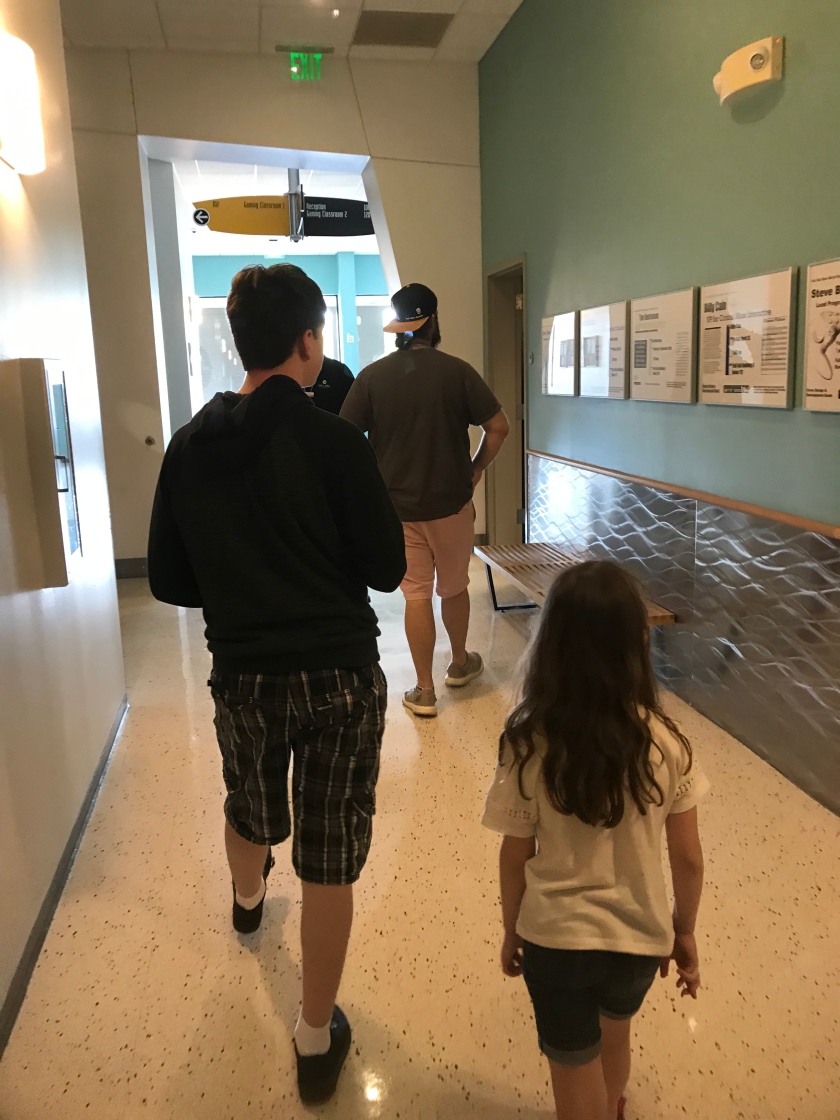 The kids swam at the hotel pool in Orlando while I acted as lifeguard. 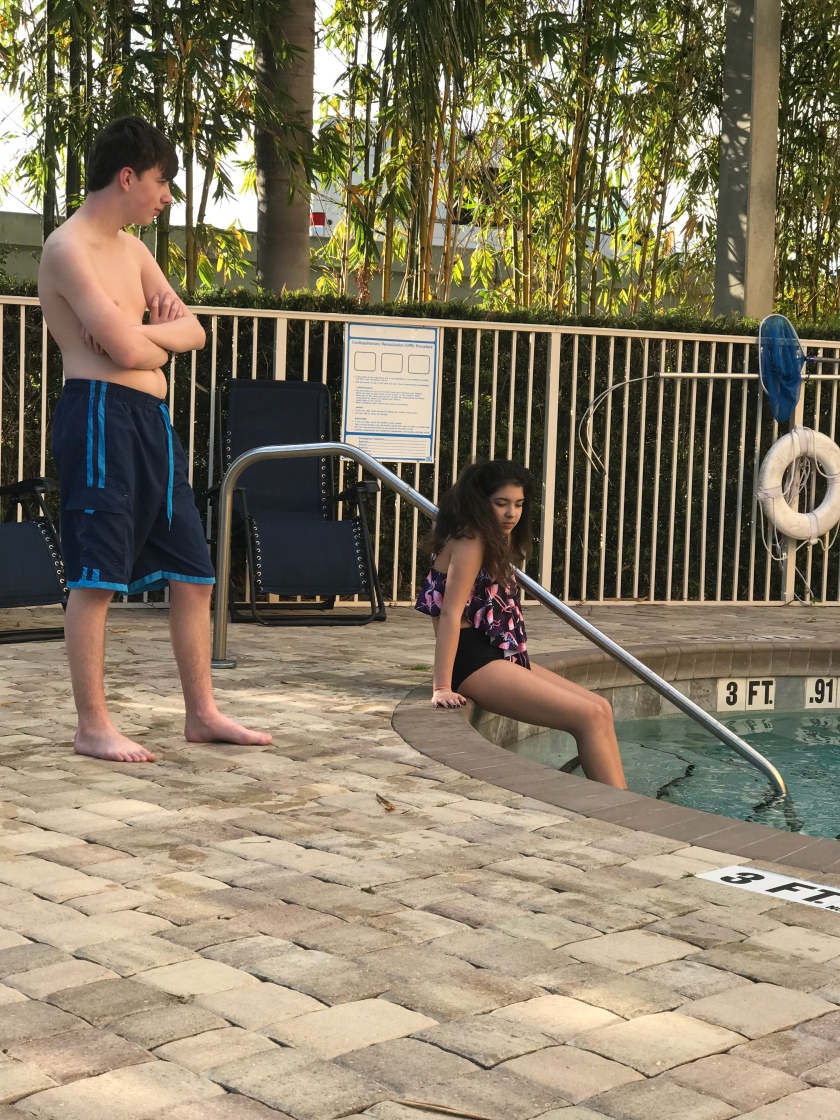 On Wednesday the girls and Poppa Studly spent the day at Sea World, so I have no photos of that. I heard plenty of stories of fun and silliness, though. Harper even coerced her Poppa into riding a roller coaster. He says it was the last one he’ll ever ride. We’ll see about that.

The girls did get tattoos at Sea World, but I only got a photo of Harper’s when we were back in our hotel room.

Garrett and I spent our day at Universal Studios, and I’ll share those pics tomorrow. I know, I know, you’re all on pins and needles to see them. 😂

Yesterday Studly Doright and I took the visiting grandkids to St. George Island for a bit of beach time. The granddaughters and I are beach people. My husband and our grandson are not. Note Studly’s scowl and Garrett’s total disregard for the sand and surf. 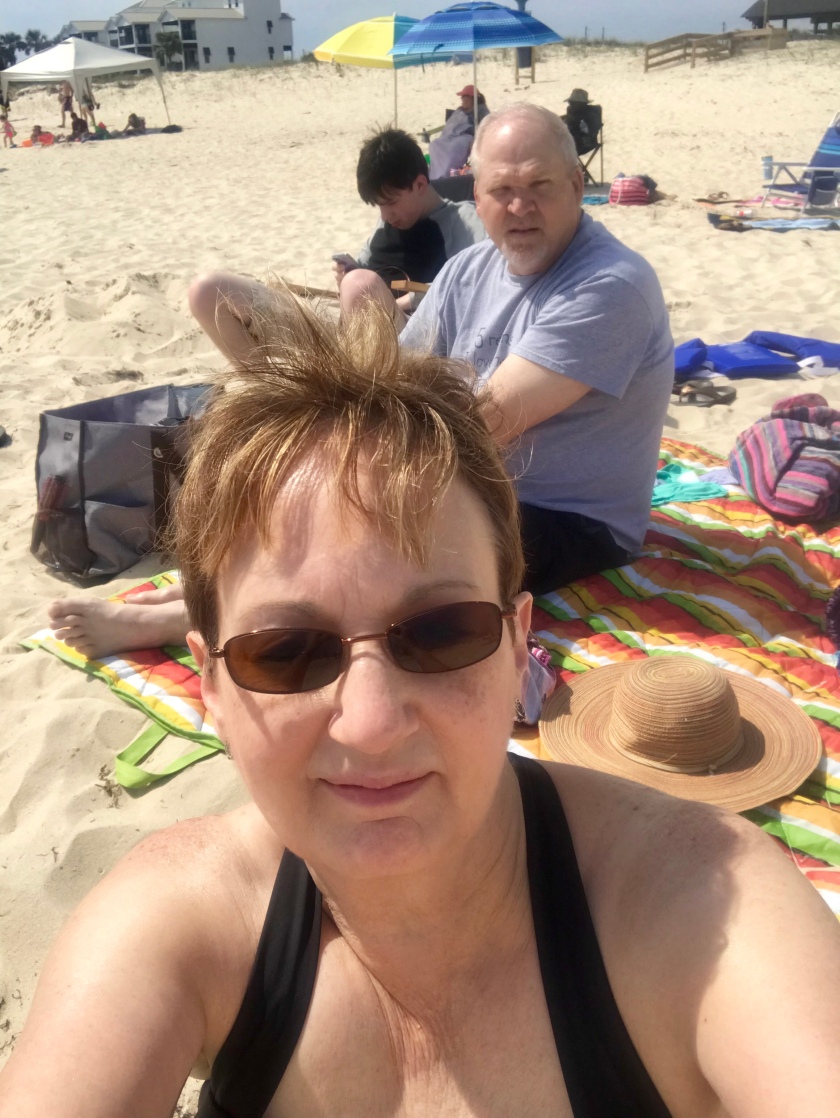 Meanwhile, McKayla (below, left) and Harper had fun wrestling the boogie board. I say “wrestling” because neither ever managed to actually ride the darned thing.

Much hilarity ensued while I kept an eye out for any dangers. I didn’t relax much on this beach trip. Still, the sun was glorious and the water was wonderful.

Studly Doright and I took the visiting grandkids to see Captain Marvel at a Tallahassee theatre today. It’s a fun movie, and everyone, especially the youngest kiddo, was captivated. 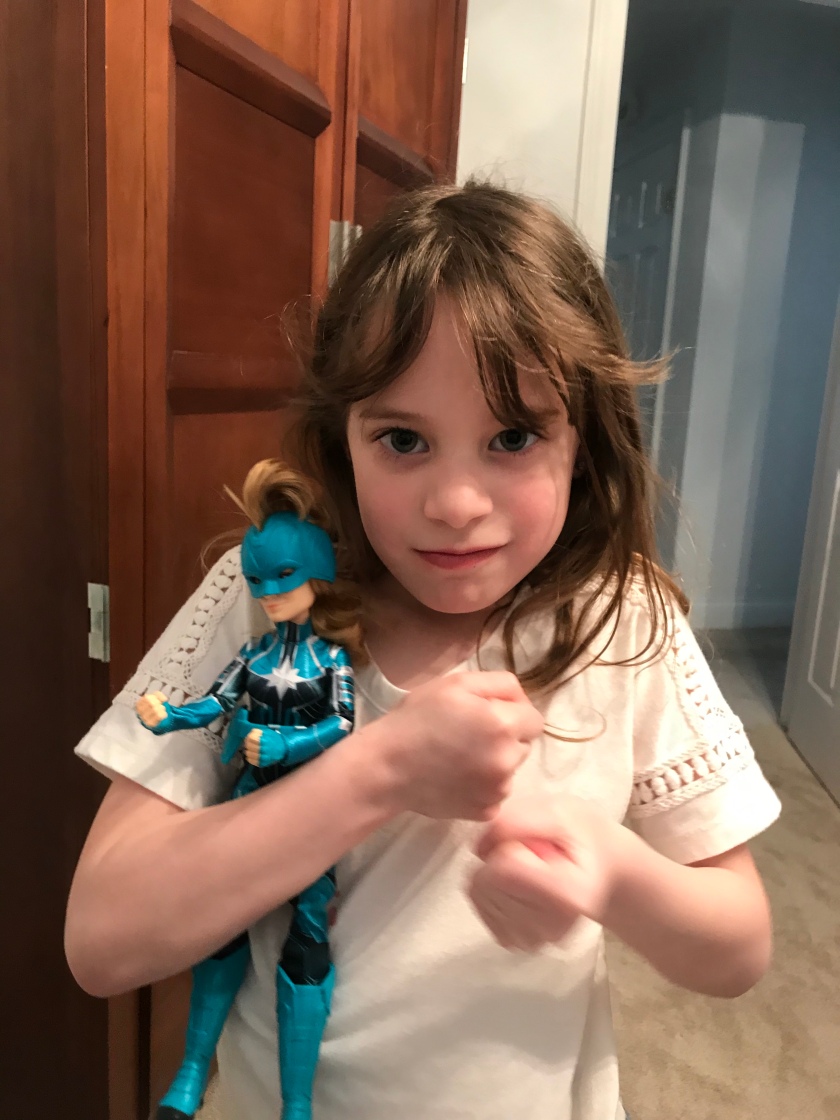 Yesterday I had an upper endoscopy and learned that I have a dire condition known as LUQ. Before you begin sending condolences I have to admit that’s just another term for “bellyache.”

Sheesh. I could’ve told them that without going through the fasting and discomfort associated with an upper endoscopy. Although, to be honest, the discomfort was minor and mostly consisted of me being a bit chilly until the nurse placed a warmed blanket over me.

I probably had an ulcer, but if so it healed before the procedure, and now I just have some inflammation in the abdominal area. I have to lay off dairy products for two weeks while also taking a good probiotic (the doctor kind of made fun of my gummy probiotics) and Citrucel.

Color me relieved. I’m proud of my LUQ diagnosis. Hoping I can milk it for a good long time. It’ll have to be almond or soy milk though. (Any tips on dairy free diets are welcome.)

There’s no doubt I’ve had a weird week running from one medical related appointment to another, fasting for a procedure every day, and then sleeping off anesthesia most of today.

Tomorrow, though, life takes a turn for the better because my Illinois grandkids are finally going to be here! It’s a good thing I got my sleep in earlier today, because I’m pretty sure I’m going to be too excited to sleep tonight, kind of like these kids in this old Disney commercial: 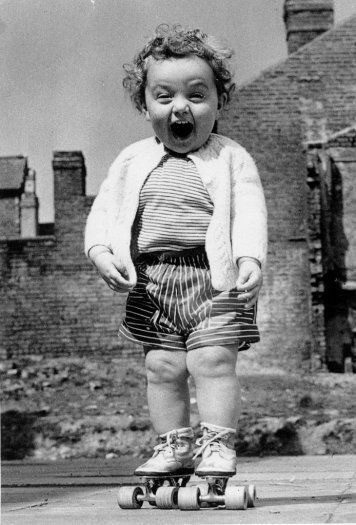 Three days in a row now I’ve had to fast for a morning procedure. Once for blood work, once for an ultrasound, and again this morning for an endoscopy. It occurred to me yesterday as I was having some kind of gel smeared on my abdomen that “fasting” is an odd word for a process that seems to drag on forever. Shouldn’t it be called “agonizing” or “slow mo deprivation?”

I decided to look up the meaning of fasting as it pertains to food. People fast for religious reasons as a means of showing restraint or abstention. Basically it means to hold fast or firm against the temptations of food, to be immovable in one’s resolve. Okay. I can get behind that. I just wish there was a way to make fasting go faster.

Send me some good vibes this morning. I’m hoping the doctor finds what’s causing my gastric distress so I won’t have to fast any more for a good long while.

If you’re anything like me this is an outline of the things you stand to lose beginning in your 40’s:

The first to go will be your 20/20 vision, and even if you already wear corrective lenses suddenly you’ll be unable to read the fine print on medicine bottles. And it happens overnight, literally “now you see it; now you don’t.”

Next on the chopping block is your ability to hear words in normal conversation or on the movie screen. “What’d they say?” will become your new theme song. I chalk this loss up to too many years of loud rock and roll. “Huh?”

Sometime after the hearing begins to go, you might notice your bladder starts to lose its ability to hold out against sneezing, coughing, and laughing. Invest now in bladder control products.

The memory might’ve started to wane around the same time as the hearing, but I really can’t remember.

As long as I don’t lose my sense of humor I guess I’ll muddle through: blind as a bat, hard of hearing, incontinent, and forgetful. Baby, I’ve got it all going on. 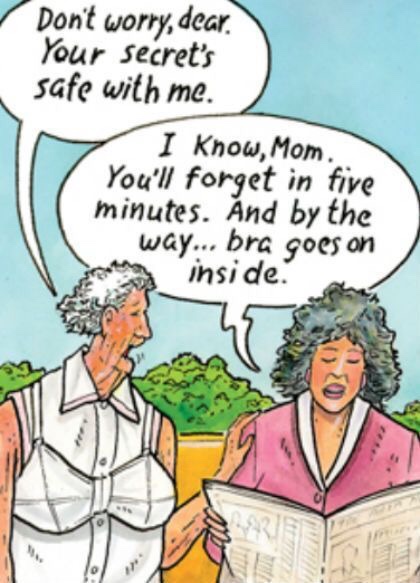