Last year I posted snapshots and tried to number them reliably, but I’m rather a disorganized soul, and soon jumbled up the count. I’ve never let disorganization stop me in the past, though, so I’m just going to number these things according to an ever changing set of rules.

I snapped this photo yesterday in the garden area of my dentist’s office in Tallahassee. Then I proceeded to ask everyone what it was. No one in the office had a clue. I guess that’s why they went into dentistry and not botany.

Anyway, perhaps a reader with some gardening knowledge can help me out: 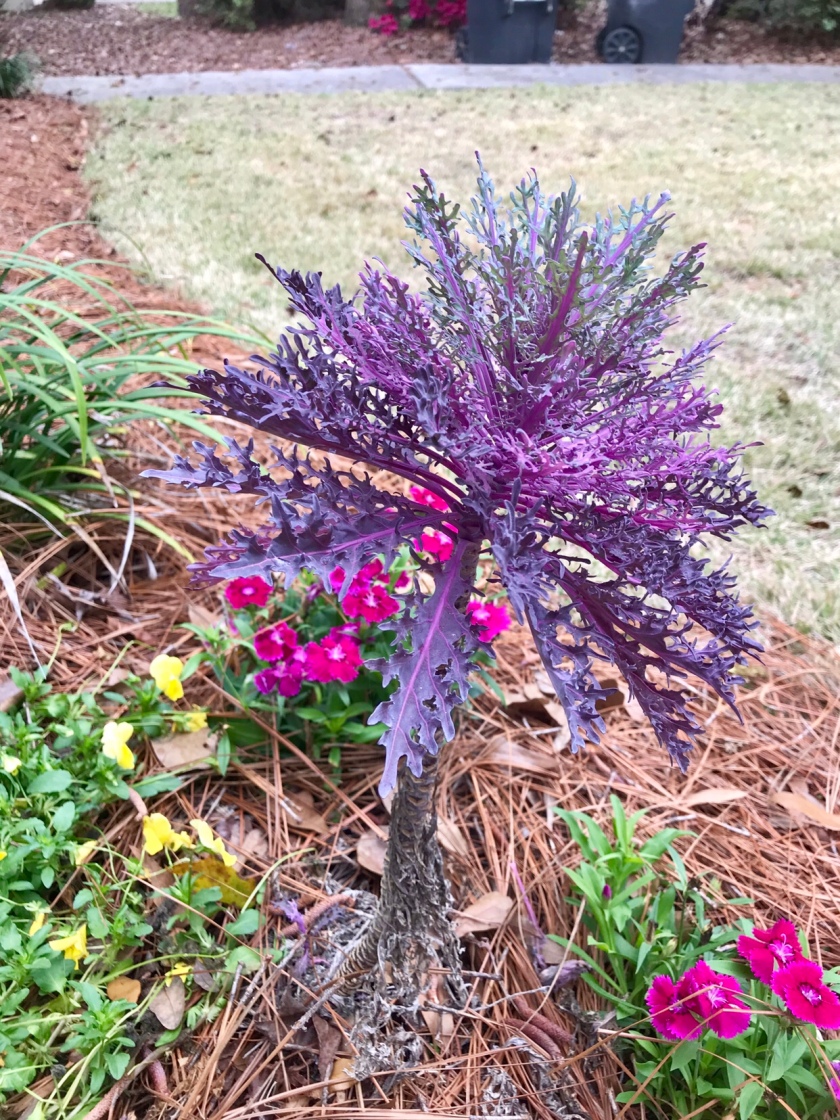 The blossoms aren’t on the plant itself, so kindly ignore them. Do note the purplish serrated looking leaves, and the oddly bare trunk-like stem. The plant is striking in its almost alien demeanor. I imagine if plants grew on Venus, this is what they’d look like.

Thanks in advance for any assistance.

All the rest have thirty-one.

But leap year coming one in four

February then has one day more.

2018 is not a leap year, thus today, February 28, is the last day of the February minimalist challenge. It has been a good month to get rid of stuff, beginning on day one with this green bath rug, which developed its own story https://nananoyz5forme.com/2018/02/08/be-careful-what-you-ask-for/.

Along the way I’ve surrendered books,

I’ve also bid adieu to spices, shoes, sample products, and a boatload of other stuff that I won’t bore you with. 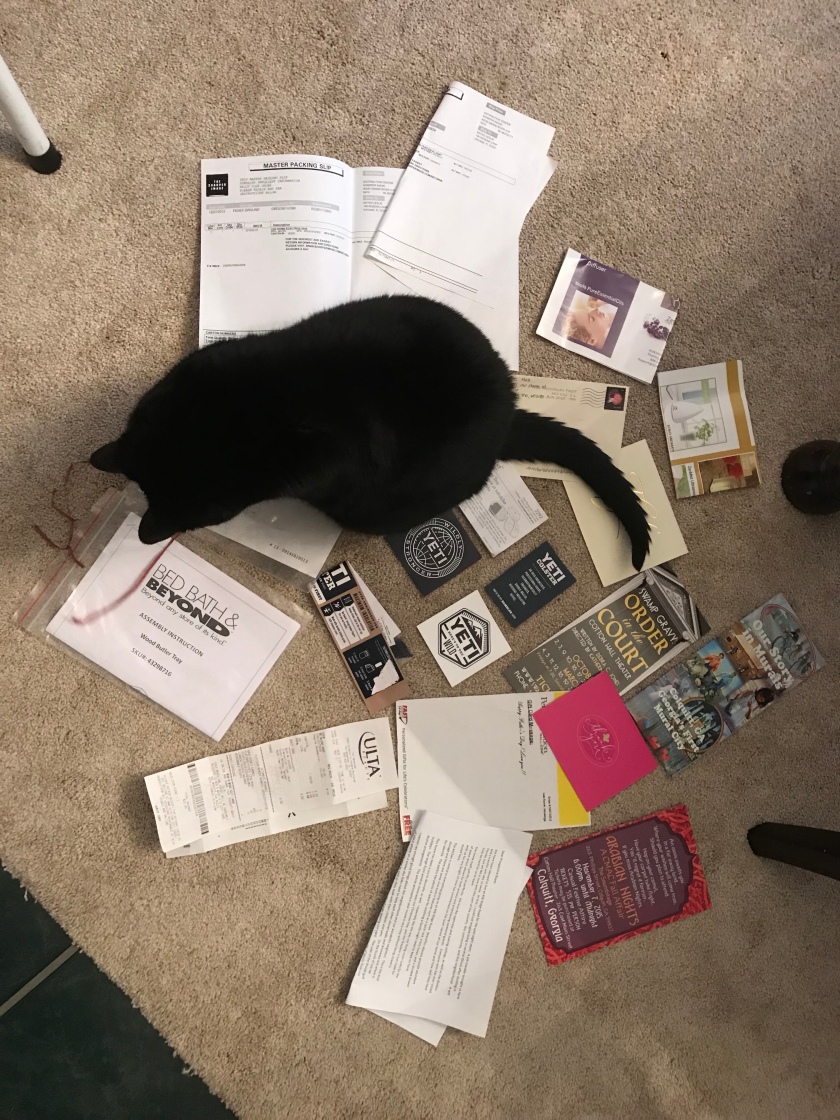 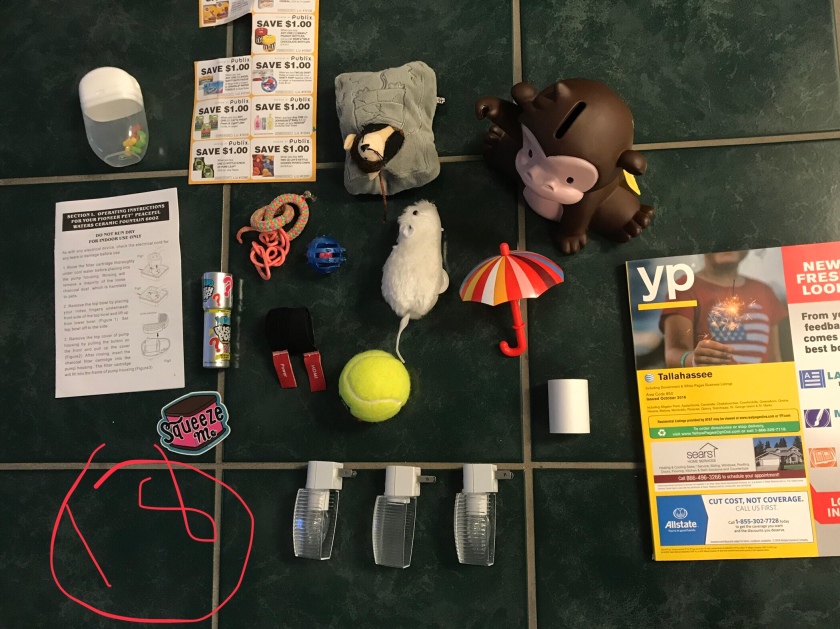 On this 28th day of February there was only one object I deemed perfect to celebrate the finale. Wine corks. Twenty-eight wine corks.

My cropping is lousy, but trust me, there is one cork for every day of a non-leap year February. I worked hard for those corks.

Thanks to everyone who followed my progress this month. Blogging about the challenge made it fun and gave me something to look forward to every day. I’ll continue in March, sparing you all the details, but if there’s one thing I’ve learned it’s that I have junk to spare.

Now, I think I’ll pop the cork on a new bottle of wine and celebrate the end of February properly. Too often I see the elderly talking, instead of listening. They -just like me- think they know it all and they are so eager to spread their wisdom, regardless if wanted or unwanted.

Apparently in the world of the minimalist challenge there are such things as bye days. These are days that a participant might be awarded due to the excellent nature of a previous day’s offering. On a bye day, said participant doesn’t have to purge anything!

Great news, eh? Well, not exactly because the award left me high and dry in the blogging arena. I’ve begun to use the challenge as something of a reliable crutch and all of a sudden it was knocked out from under me. I’m limping badly here.

In case you wondered, this is the display for day 26 that earned me the bye. It was impressive, even if I do say so myself. 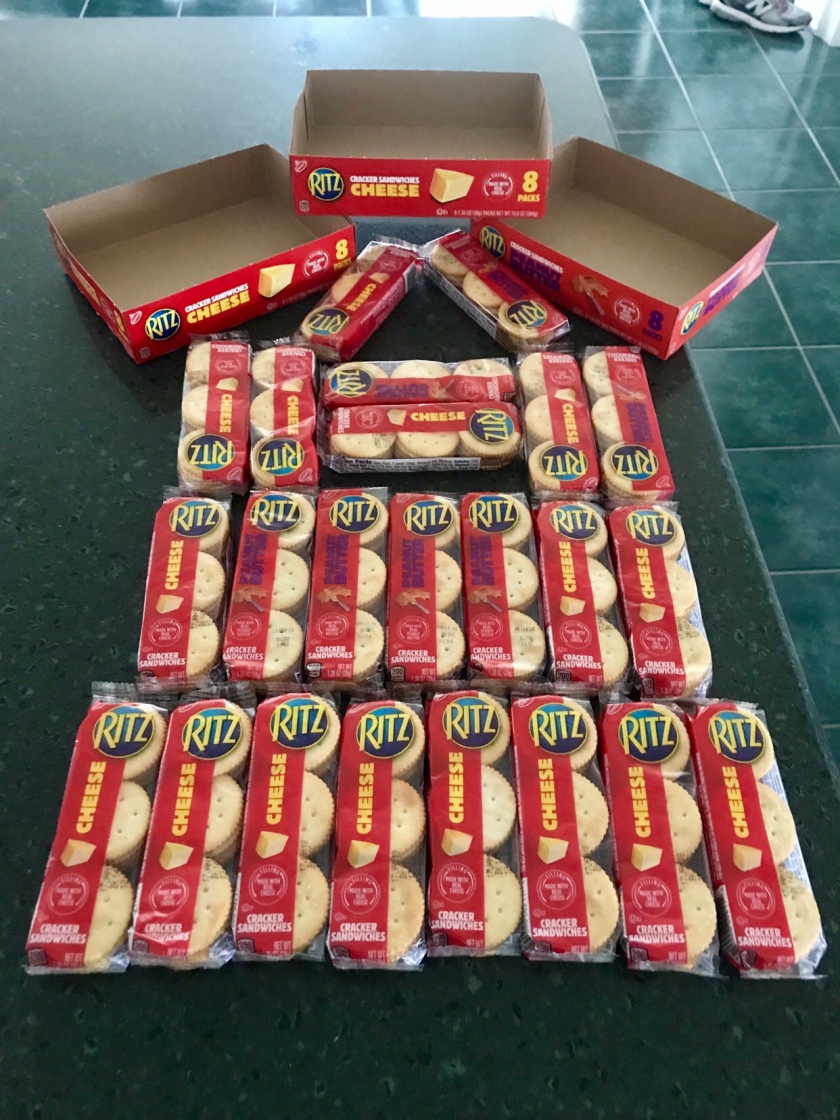 I’ve already prepared for day 28, so I’m taking the day off. Bye for now!

Watch the entire video link from MSNBC, and see why I am fuming.

I live near Tallahassee, Florida, and have personally attended hearings on gun laws at the Capitol. On my first visit the bill being considered in our House of Representatives was to allow open carry in our state. The opening process was mundane–lots of parliamentary procedures and much palavering.

Then one by one people from both sides of the argument were called upon to explain in front of a panel of legislators why they either were for or against the right of Floridians to openly carry firearms. One older woman wearing a red hunting jacket and sporting a grey pageboy style haircut sat right up front, not quite part of the panel, but not a part of the regular gallery like myself. It was Marion Hammer.

I heard during this hearing that Marion, who is NOT a duly elected official in the state of Florida, had helped craft this open carry bill. Every time there was a proposed change to the bill or a question about what was included this woman was called forward to consult with our ELECTED lawmakers. She holds an immense amount of power, but again, IS NOT AN ELECTED OFFICIAL.

There is something rotten about a system that gives one person the power Ms. Hammer wields. Didn’t Americans launch a revolution based on our right to be represented by duly elected officials? Right now her favor or lack of it can make or break a politician in this state. She needs to go.

Last night Studly Doright and I were watching the University of Kansas basketball team play Texas Tech for the Big 12 championship on television. It was a great, too-close-for-comfort game, and Studly worked up a powerful hunger while cheering for the Jayhawks.

Late in the second half he asked, “Do we have any snacks? I feel like I need to eat something if we’re going to win this game.”

Rather than throwing something at him or telling him to get his own damned snack I hoisted myself out of my chair and went in search of some munchies. The first likely snacks I came upon were several boxes of Ritz cheese crackers and a few more of the peanut butter version.

We don’t normally keep these on hand, but I recalled buying them in preparation for hurricane survival last summer. There’s nothing like a Ritz cracker to see you through the dark times, am I right?

Before asking Studly if the crackers would fill the bill for his snack I thought to check the expiration dates. November 17, 2017, was stamped on each box. So while they didn’t get to fulfill their destiny as snacks, the crackers were pressed into service for today’s minimalist challenge.

Twenty-three packages of Ritz crackers plus three of the boxes in which they were stored makes a total of 26 items for February 26.

I found Studly another snack, and the resulting energy revived him enough to power the Jayhawks through to a two-point victory over the Red Raiders and KU’s 14th straight conference championship. I doubt they’ll publicly thank us, though.

On day 25 I’m getting rid of items I used while working for a reading research program in Tallahassee. These stickers along with the non-refillable mechanical pencils and the plastic box I toted them around in, have been hanging around my closet for the past year doing absolutely nothing except taking up space.

My youngest grandchild might want the stickers, the regular pencils, and the pink box, but the mechanical pencils are going into the trash.

I suspect that if I’d counted individual stickers instead of sticker sheets I could have scored a lot more points, but honestly, who wants to do that? Plus, I’m not too worried about having enough detritus to meet my goals. This has been much too easy, and that’s kind of sad.

Today I’m ridding myself of a group of decorative items, a couple of pieces of clothing, three Texas license plates, an empty perfume bottle, and half a dozen empty boxes. There are actually more than 24 items in the mix on this 24th day of February because once again I made a purchase (perfume, because the old bottle was empty) that was merely a want and not a need; although, some would argue that perfume is a must have. I love to smell pretty, but I don’t mind going sans scent, either.

About half of today’s haul will go to Goodwill and some will go to the recycling bin. As long as they’re all gone, I’m a happy camper.

There are only four more days to go in the February challenge, and I feel like I’ve barely made a dent in the acclimated clutter. I’m still trying to decide if I’ll begin anew in March. 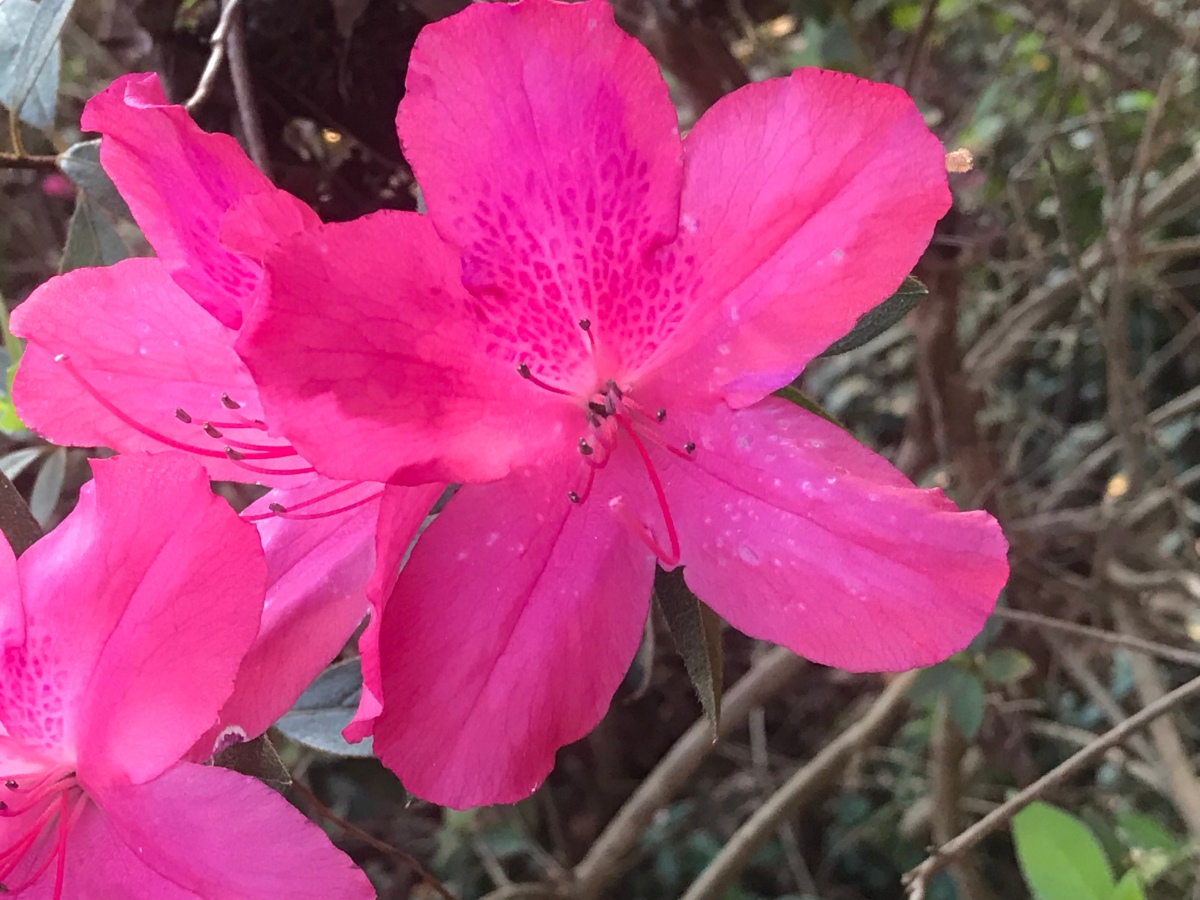 But as I walked around my yard today taking these photos I was overcome with grief. Surrounded by this display of life in bloom, I stopped to pray for those whose lives were cut short by a gunman last week in Parkland, Florida. Seventeen people who won’t experience spring’s beauty. Young people who will never get to hold their own babies or experience the joy of being a grandparent, growing old with their spouses. I prayed, too, for their families whose lives will never be the same.

One individual with a high-powered rifle ended the hopes and dreams of 17 people in less than five minutes. Was he mentally ill? Perhaps. Did society fail him? More than likely. Did numerous agencies fail to do their jobs? Perhaps, but until someone commits a crime these agencies often have their hands tied. If he hadn’t had easy access to guns would he have found another way to attack? It’s possible. BUT, he DID have easy access to guns, and this access allowed him to literally destroy 17 lives and figuratively destroy hundreds of others.

So stop with your second amendment talking points. Let’s do the right thing and begin looking at real solutions to gun violence in this country.

I promise these Guinness bottle caps have been collected over many, many weeks, not a matter of a few days. There are 23, plus eight to compensate for two frivolous purchases I made on Thursday.

These bottle caps have been taking up space in a kitchen drawer and will be forwarded to Studly Doright’s youngest sister, the beautiful and witty Amy, in Texas. Amy is a creative soul who will turn these Guinness caps into a work of art.

Of course, some would argue, they already are a work of art. And the Guinness? Sublime.