Sometimes having fun is hard work. Today Poppa, aka Studly Doright, and the grandkids took the bikes to a local riding park outside of Tallahassee. I went along just in case a chase vehicle was needed.

Poppa made sure both Dominique and Jackson played active roles in unloading their bikes. 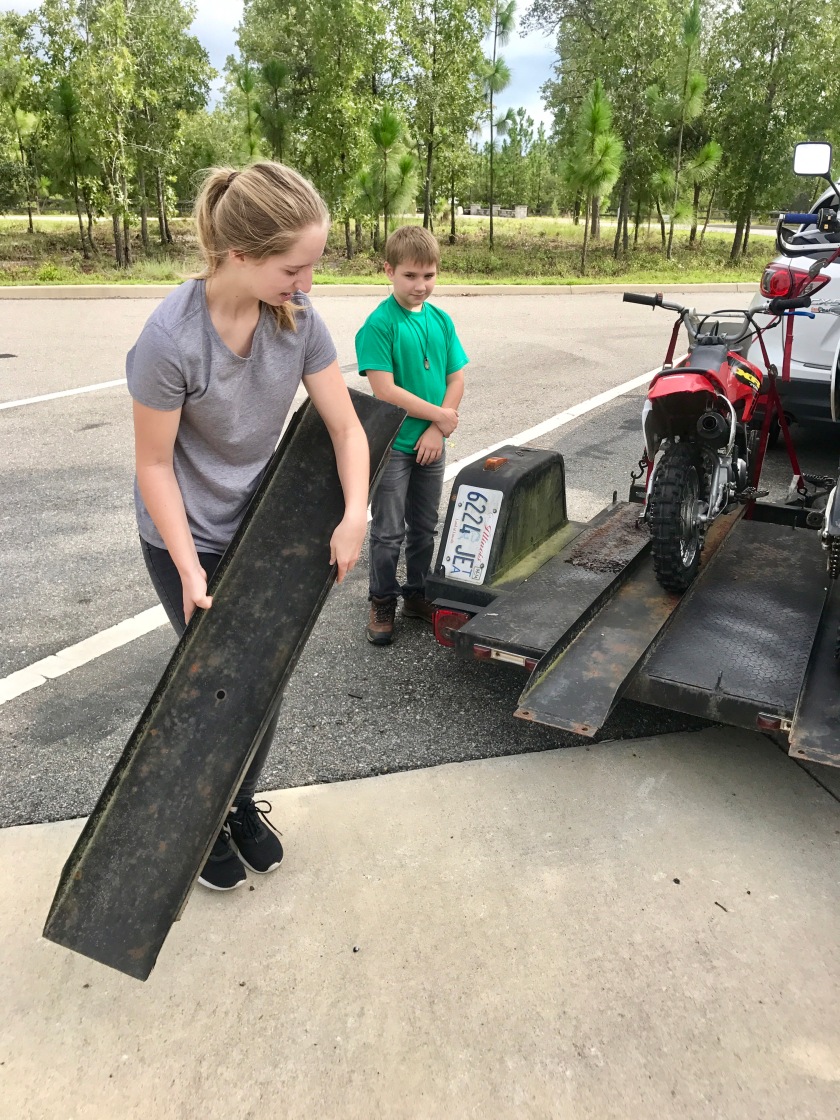 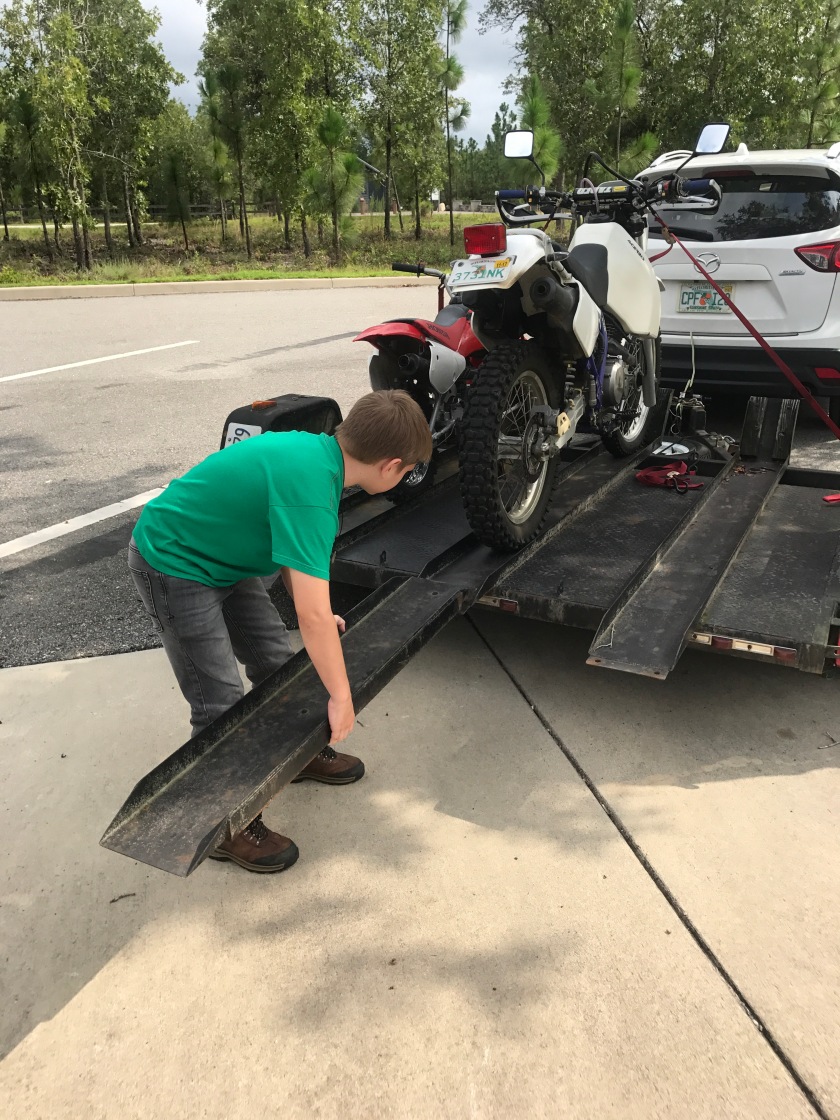 While the three intrepid bikers took off down a series of dirt trails I sat in the car and read for awhile. Consequently, I have no exciting photos of their ride, only secondhand tales of near misses and wrong turns. In the end, my chase car services were necessary when Dominique's scooter suffered a minor breakdown. It is nice to be needed.

Our Texas grandkids are visiting us here at Doright Manor, and the prime attractions are their motorcycles.

Jackson wasted no time in gearing up and cranking the engine: 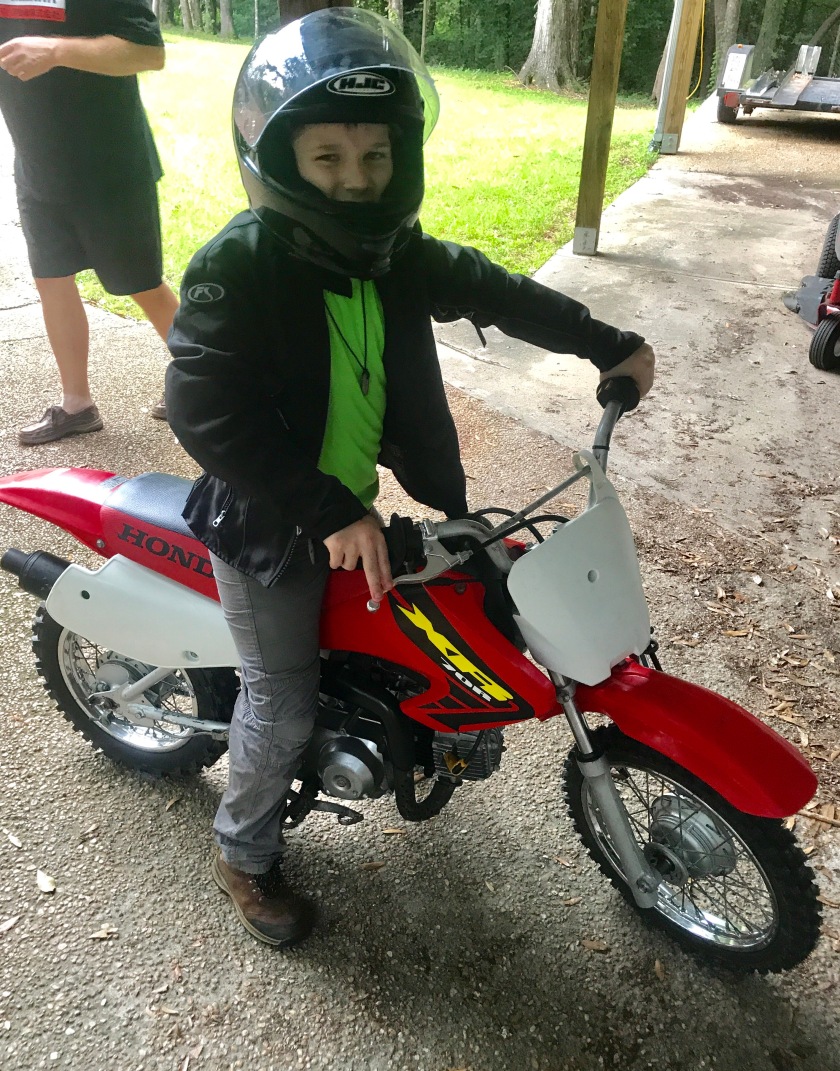 Dominique had to make sure her hair fit under her helmet: 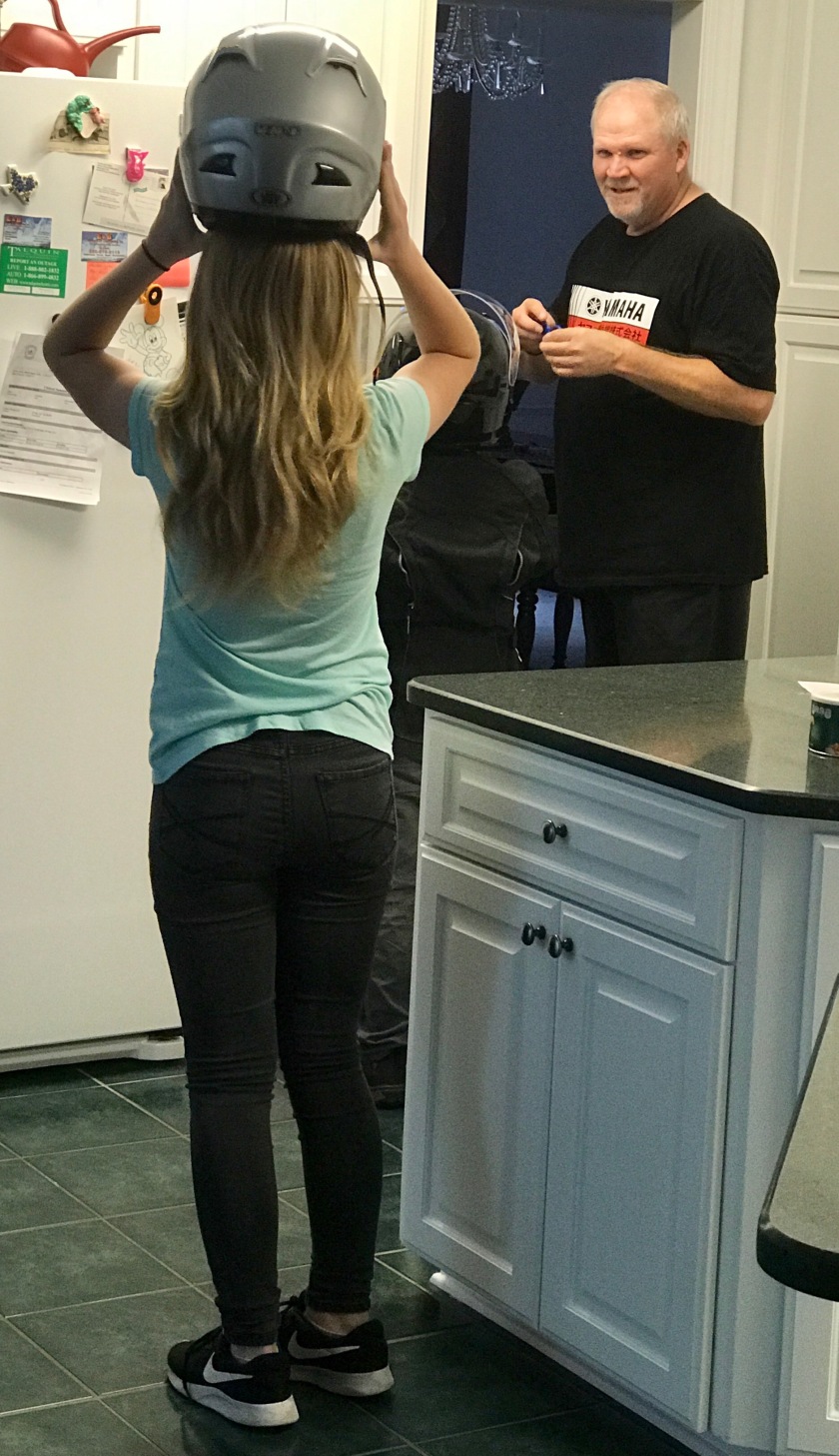 Too real and very scary! Read more at eurobrat.wordpress.com.

They wouldn’t send real Americans away to be stored.  Radical Muslims, sure.  Illegal immigrants, yeah.  Maybe welfare queens.  But not just…regular Americans.

That’s what Judy had nervously told herself for that entire six weeks, between the day she was first called in for questioning and the day when she was, in fact, sent to one of the country’s resident storage facilities.

She was young and stupid when she took those pictures.  Since then, she had turned her life around.  She was born again and regretted the things she had done when she was lost.  She was no longer that woman.

But in President Pence’s America, that didn’t matter.  Pictures “of an inappropriate nature” like hers meant she was a defective citizen.  A friend found the pictures somewhere and submitted a complaint…because of course they did.  Everybody did that.  If the situation were reversed, she would have done the same.

My two Texas grandkids and I headed towards Florida yesterday morning in hopes of stopping for the night in time to swim and enjoy our hotel's happy hour. Unfortunately, due to a terrible accident on Interstate 20, we sat in stalled traffic for over an hour.

This was me last night after we finally got into our hotel room. Too many hours behind the wheel of my car have rendered me cranky and exhausted. And we missed our hotel's happy hour by five minutes. Damn it.

Our oldest granddaughter has a sweet little hedgehog named Bandit. Until yesterday I'd only been able to see Bandit via FaceTime, but finally we got to meet face to face.

She's such a sweet little bit of fluffiness! Unfortunately she had to stay behind while the grandkids and I travel to Florida. I promised Bandit we'd stay in touch via the internet. She was fine with that.

On Tuesday evening my son took me to Lakewood Brewery in Dallas. I had already enjoyed their award winning Temptress imperial milk stout, and Jason wanted me to visit their tasting room.

Temptress is an outstanding ale, but it's not Lakewood's only brew. If you live in the Dallas area you should check them out. http://lakewoodbrewing.com.

My favorite part of the evening was a brush with greatness. Yes, that's almost Cher posing with me.

Here's a little taste of Cher-aoke.

We didn't get to stick around for karaoke, but I enjoyed myself. I even bought a tshirt.

I am visiting my son and his family in Dallas this week, so my posts are going to be brief glimpses into their lives. Jason and his lovely wife Liz adopted this amazing Golden Retriever/Great Pyrenees mix dog about a year ago.

His name is Toby and he's approximately the size of a coffee table. I fell in love with Toby at first sight.

In the picture below Toby is telling my son that it's well past time to go for a ride in the car. 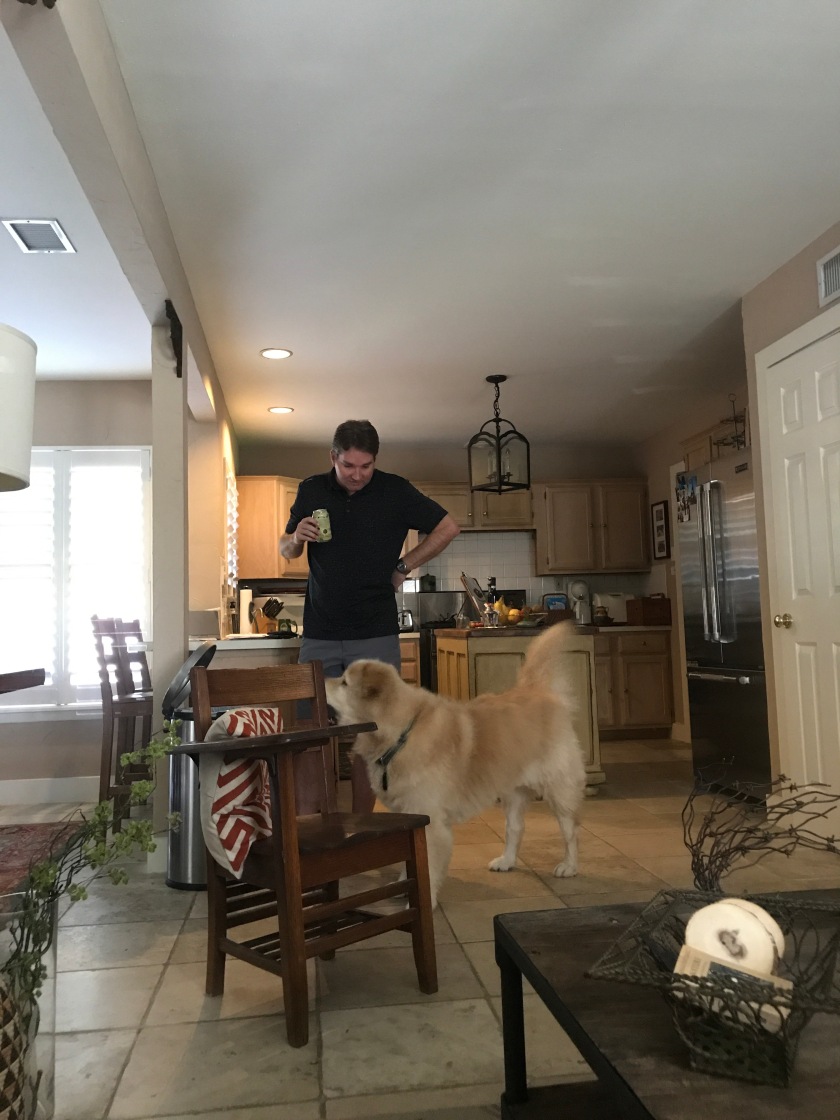 Studly Doright won't let me have a dog, but if he did, I'd want one just like Toby.

Above, Toby is charming a fellow canine. The little boy in the photo was enamored of both dogs, while they were so into each other that they didn't even notice there was a human in their midst.

I am on a road trip from our home in Florida to our son's home in Texas. Studly Doright called me yesterday to say someone using my American Express card has been buying stuff all over the world including plane tickets to exotic destinations and a pinball machine.

This morning he called to ask if I'd just made a sizable donation to Doctors Without Borders. While I hadn't, I applauded the thief's social conscience. I just wish he/she had waited for a more convenient time to steal my card. Like never.

Irrelevant picture of an alligator.

Yesterday I drove across Florida, Alabama, Mississippi, and Louisiana, on my way to see my son and his family in Dallas. More than once I encountered torrential thunderstorms that reduced visibility to less than a handspan.

My knuckles are still bone white from holding the steering wheel in a death grip. At least most of my fellow travelers kept their speed in check; although, occasionally a hotshot would come barreling willy nilly through the downpour as if the roads were dry and the sun shining fiercely. I'd have flipped them the bird if I hadn't feared taking my hand off the wheel.

In addition to dodging the aforementioned would-be NASCAR drivers, I also had to avoid an odd variety of other objects, including, but not limited to the following:

But the best thing I had to dodge was a large alligator. He was dead, thank goodness, but still gave me a fright as I saw him just in the nick of time. Apparently some other driver wasn't as fortunate as I'd been.

Hopefully today, as I head north and west away from the coast, the weather won't be as crazy, the drivers less aggressive, and the gators safely in their proper habitats. I'm tired of being the artful dodger.