On the banks of the mighty Mississippi, in the quaint village of Port Byron, Illinois, rides this giant of a man. The locals dubbed him “Will B. Rolling,” and I think that’s a fine name for this picture.

Characters Ross, Monica, Rachel, Joey, Phoebe, and Chandler first came to the small screen as FRIENDS 25 years ago. I watched the series sporadically, but was never one of those super fans who never missed an episode. I’ve most likely seen every installment by now, though, given that the popular series has never exactly gone away.

My daughter, Ashley, IS a super fan, and she’s shared her love of the show with her middle child, McKayla. So, when Ashley learned that the 25th anniversary of the popular series would be celebrated with exclusive showings of select episodes in movie theaters she got pretty excited.

I’m at Ashley’s home in Illinois this weekend, and coincidentally, one of the showings of FRIENDS was scheduled at a Cinemark theater in nearby Davenport, Iowa, on Saturday night. Well, how could we not go? Ashley bought tickets, and away we went.

(Waiting for the first of four FRIENDS episodes. That’s daughter, Ashley, on the left, granddaughter, McKayla, in the middle, and yours truly on the right.)

It was such fun to see these small screen characters on the big screen in four episodes. Ashley’s favorite episode in the series “The One Where No One’s Ready” 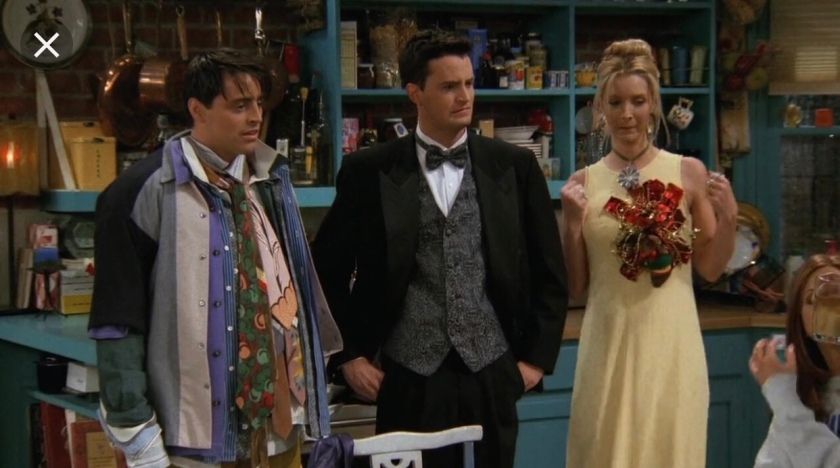 was among the ones shown, as was one of my favorites, “The One with the Embryos.”

I had a great time laughing at the familiar antics of the friends on FRIENDS while enjoying movie popcorn and candy with two of my own best friends. The evening was practically raining friends, don’t you know. As Chandler might ask, “Could there BE anymore friends?”

Currently I’m in western Illinois hanging out with my daughter and her family. On Friday the adults went to work, the children went to school, and I got to snuggle with the pets. 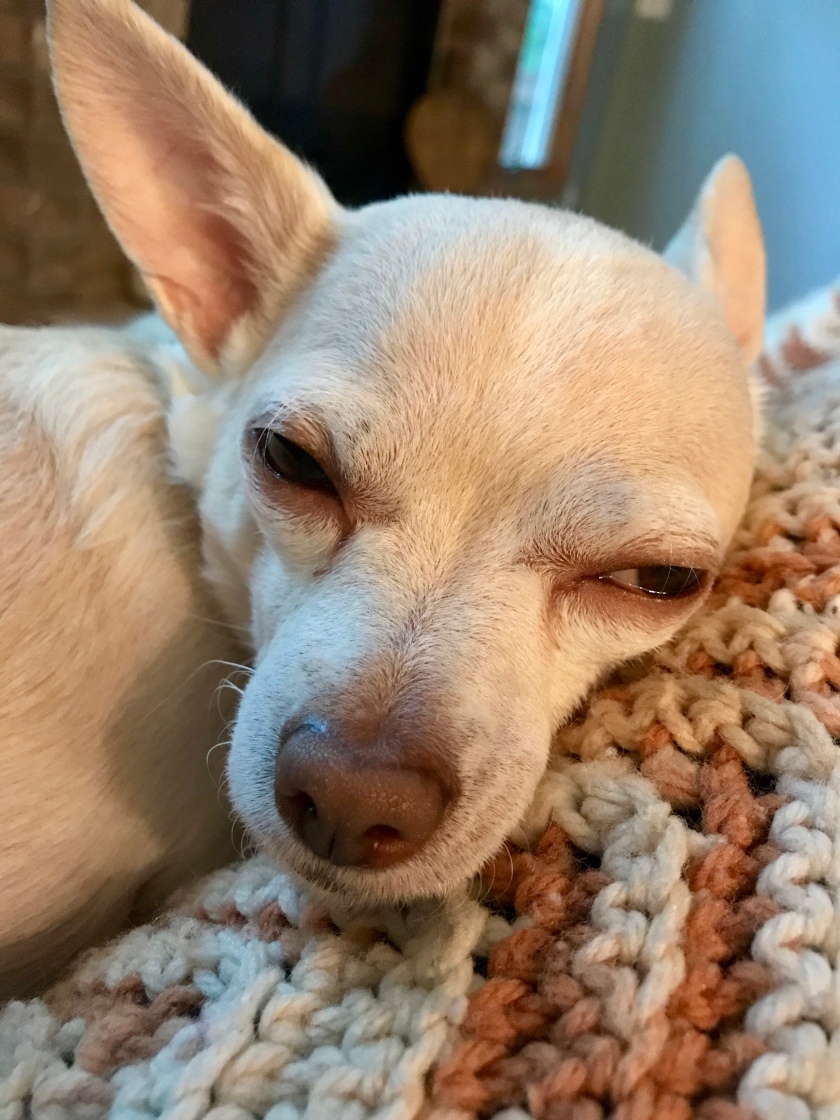 Below, is Snuggles, a pesky cat. 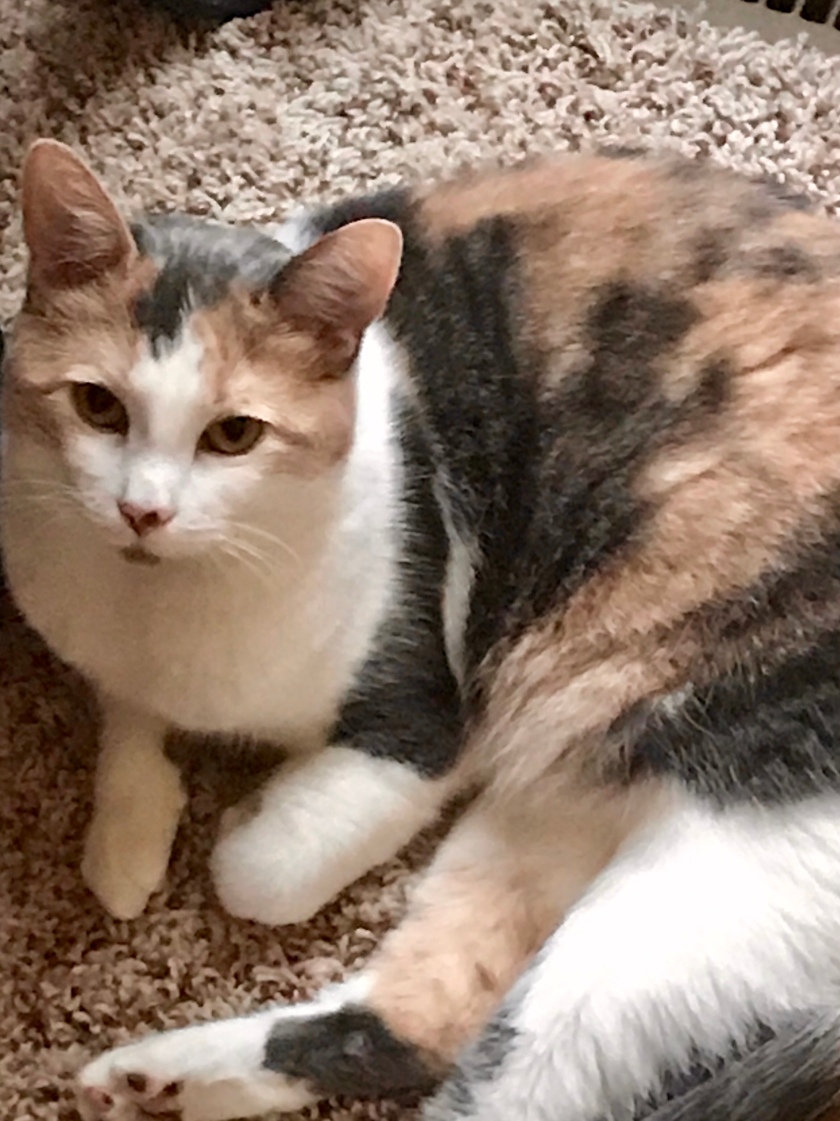 She is beautiful, but something of a little stinker. Messing with Match is her favorite pastime.

The three of us passed a stormy day together in quiet companionship; although, as soon as the thunder and lightning moved on the cat was back to attacking the dog.

I snapped this one while waiting in line at the Atlanta airport. 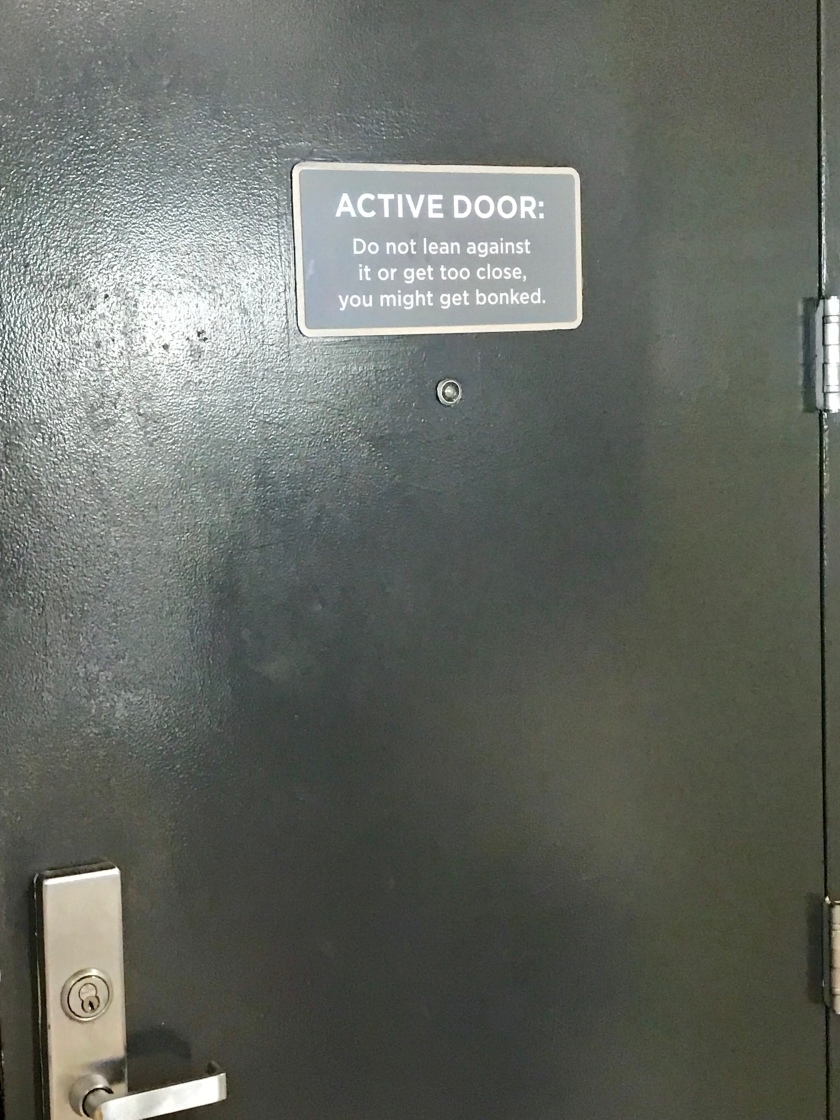 I call it, “A Humor Door.” Not to be confused with a humidor.

On Tuesday night I drifted off to sleep as gently as an innocent little lamb, only to awaken twenty minutes later with my mind raging like a caged lion. My trip to Illinois was still two days in the future, yet my brain paced restlessly inside my head as if my flight was imminent and I was woefully unprepared.

Truthfully, I was unprepared, but I still had ample time to do laundry and pack and straighten the house before I had to leave Doright Manor for the airport. So why was I all abuzz? Welcome to Anxiety Central.

Irrationally I began worrying that my car would break down on the way to the airport. What would I do should that happen? I worried that I’d forgotten to get cash from the bank, so I got out of bed and wrote myself a note that I then taped to the bathroom mirror where I’d be certain to see it first thing the next morning.

I became concerned that I’d finish the book I was reading on my kindle and wouldn’t have ample connectivity to download a new one. Most worrisome was the state of the liquids I NEEDED to pack for the trip. Liquids that might not be able to fit into a clear plastic quart baggie. Damned TSA requirements. How’s a girl supposed to cram all of her necessary liquids into such a small bag?

Zip, zip, zip went the thoughts in my brain. I was electric, and not in a good way. Poor Studly must’ve felt my frantic vibes causing him to adjourn to the sofa in the den at some point in the night.

When he left for work on Wednesday morning he planted a kiss on my cheek and told me he’d see me when I returned on Monday. I’d forgotten he had to be out of town on Wednesday and Thursday and wouldn’t return until after I’d departed on my trip. Sheesh. One more thing to worry about.

You know, I might not have many talents, but I excel at worrying over absolutely ridiculous stuff. Anxiety is my middle name, and that’s no joke.

I fly on Thursday. Just get me to the plane on time.

Months can pass at Doright Manor with nothing of interest happening. Okay, so occasionally I set my underwear on fire and once I sent a green bath rug to a total stranger because I thought she needed it…

Sometimes, though, I have lots of good stuff on the horizon. This weekend I’m flying to Illinois to see my daughter and her family. We chose this weekend because all three of the Illinois grandkids have stuff going on: Grandson Garrett will be marching in the high school band playing saxophone just like his Nana (that’s me!) did. Granddaughter McKayla is a high school cheerleader, so I’ll get to see her in action, while the youngest grandchild, Harper, will be cheering before the game. I’m almost too excited to sleep!

But that’s not all, folks! In late October, I’m meeting a group of friends in Nashville for a weekend of shenanigans. Of course we’re all in our late 50’s to mid 60’s, so the shenanigans will be kept to a quiet minimum, but still, it will be fun.

I love having stuff on the horizon.

My dear husband, Studly Doright, doesn’t quite get my fascination with estate sales. Or rather, he doesn’t understand my non-competitive attitude toward them.

I don’t arise at the crack of dawn to go pawing through the belongings of some recently deceased dowager in order to find items of value. No, I’m quite content to wander through homes looking for books and/or small objets d’art to add to my collection. Now, should I happen onto a rare first edition hardcover in mint condition, or a unique piece of jewelry, I’d likely snap it up; however, there’s a whole different mentality involved in the search for pieces of that nature.

I see these people at every sale. They arrive even before the doors open and walk around with a no-nonsense air about them. They block the bookshelves until they’ve examined every vintage book, and their bags are filled with promising finds to list on eBay.

On the other hand I wander through rooms picking up nonsensical items and looking for the next book in the Harry Potter series (currently I need book 4). This isn’t to say I never find anything that’s been overlooked by a more avid shopper, but my goal isn’t to turn a profit.

This past weekend I discovered a couple of fun items in addition to The Prisoner of Azkaban. One was a small piece of art that I thought was interesting:

The other was this book of fairy tales by Oscar Wilde. 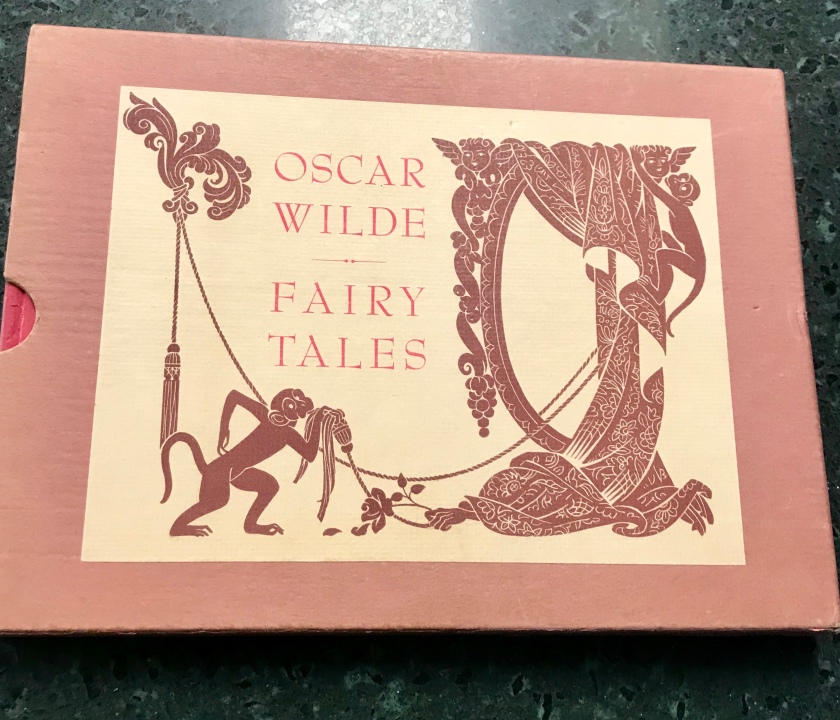 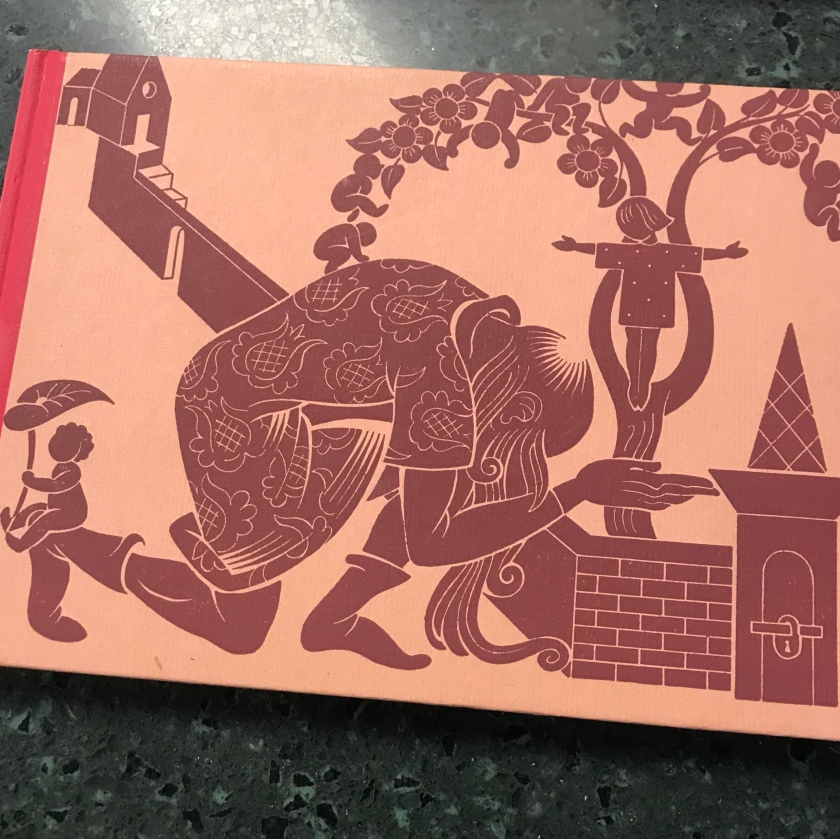 Neither is worth much, but I couldn’t leave without them. I pictured both probably going to a Goodwill shop somewhere, and thought surely Doright Manor could provide a better home for them.

Of course at some point my kids are going to have to go through my stuff and decide how to deal with my treasures. At least I won’t be around to see how they are disposed of. I hope they’ll be treated kindly.

I love a good bumper sticker, but Studly Doright frowns on me putting any on our cars. When I saw this well decorated car at my favorite vegan cafe, I was struck by a case of “Bumper Sticker Envy.” Oh, to be this visually outspoken.

Find and purchase copies of the Harry Potter novels

I’m a crazy person with way too much time on my hands.

After several weeks of searching I located book three at an estate sale in Tallahassee. I can’t explain how happy that makes me.

Refrain from trying to explain to anyone at a estate sale or garage sale or secondhand shop what I’m doing. People look at me like I’m annoying or crazy or both..

Studly Doright took Friday off work, and we drove to Destin, Fl, to hang out with his sister, and her husband from Texas, and friends of theirs who are vacationing in Destin with them. While the men played golf we ladies went to see Downton Abbey. Here’s where I admit that I’d only seen an episode or two of the television series before yesterday. Shameful, I know, but I enjoyed the film. The costumes and sets alone were worth watching for two hours. 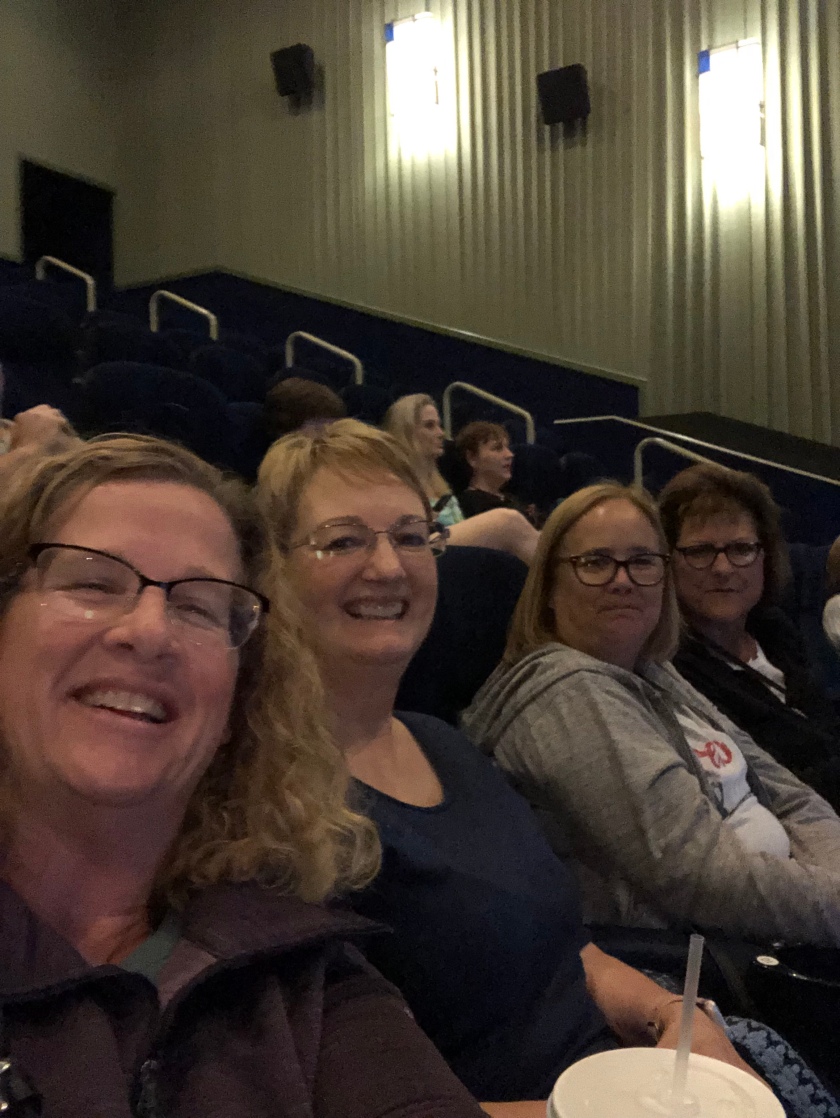 From left, Angie, me, Michelle, and Lori, waiting for the movie to begin. I’m secretly wondering if there will be light sabers used in the film. Spoiler alert: Nope.

We shopped for a bit after the movie, but I didn’t buy a thing. I couldn’t resist taking pictures of this little guy playing with the water at a splash pad in the shopping center’s courtyard. 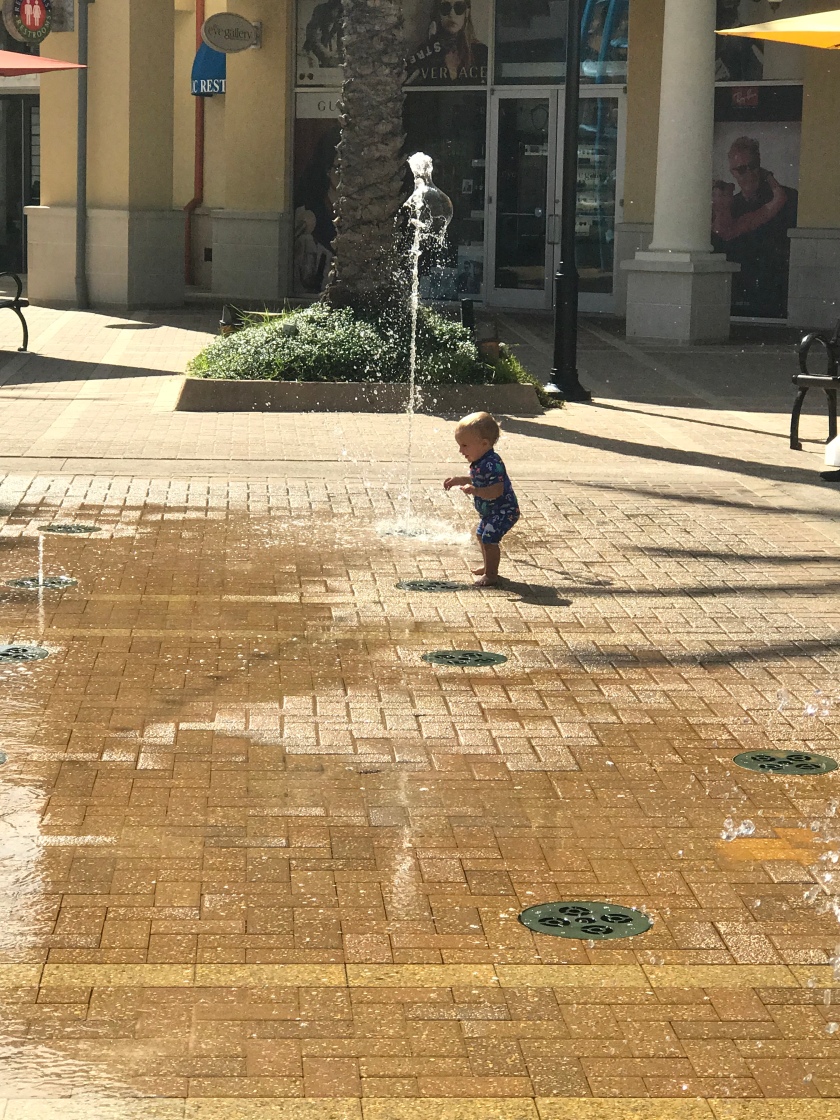 After the guys finished their round of golf, we met them at Margaritaville for dinner. I took these photos from the dining area while we waited for our meals to be served.

We drove the two hours home after dinner and went straight to bed. I think I was asleep before my head hit the pillow. Great day, though. I might have dreamt in a British accent.