I held a candle

Blew across the white hot flame

Hoping for a boon

Exhale, then prime the taper

The circle of light 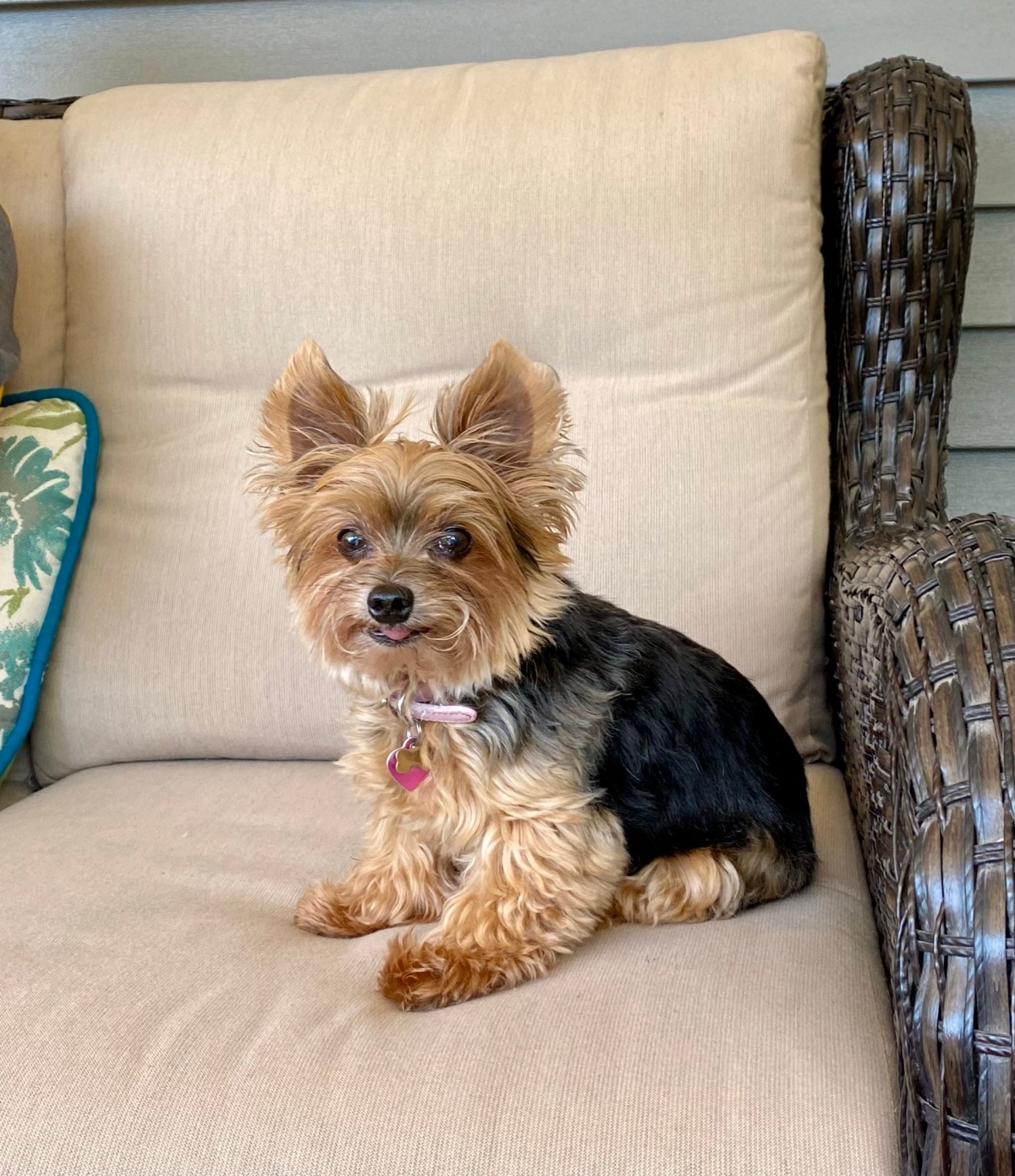 I enjoyed peach bellinis and whatever one might call a fruit and sweets version of a charcuterie board on Sunday morning at the Bettendorf, Iowa, home of one of my daughter’s friends.

We enjoyed our drinks and sweets out by the pool while watching the antics of this adorable dog, Daisy.

I’d never contemplated dognapping until the moment I first saw Daisy. Isn’t she perfect? Okay, I never really thought about sneaking her off the property, but I’d love to clone her. She is just as sweet as she looks.

My daughter was confused because in my blog I kept referring to her home as being in the eastern part of Illinois, when in fact, Port Byron is in western Illinois. My mistake had her doubting what she knew to be true. See, that’s how fake news works.

I had no malicious intent in my false reporting. Honestly, my brain tends to switch such things around. Nevertheless, my daughter needed clarification. Did she live in eastern or western Illinois?

See that blue strip in the map above? That’s the Mississippi River where it separates Illinois from Iowa—proof that my daughter resides in the western, not the eastern part of the state.

In other news, my grandson is doing well following his recent abdominal surgery. And that’s all that really matters.

Our youngest granddaughter, Harper, is a fourth grader at a rural school in eastern Illinois. Today her class will culminate a study unit on farming with Agriculture Day.

Local farmers will bring farm equipment to the school. Children will get to sit on hay bales (a very prickly experience, as I recall), and there may even be livestock to pet, along with other fun stuff to do. Hopefully the experience will encourage participants to think about where their food comes from and to appreciate the farmers who toil long hours in the fields to make the magic happen.

Students were asked to wear something green or agriculture-related to school today.

I’m not sure this qualifies as farm apparel, but her t-shirt is green, and she makes an adorable farmer.

She also has a sweatshirt, courtesy of her Grandma Jill who works for a seed company, to wear in case the weather turns cooler.

Harper found a mask to go along with the day’s theme:

Maybe we can’t all attend an Ag Day, but we can at least thank a farmer. Where would we be without them? I don’t even want to think about that.

A simple question on social media often brings out the worst in people. I’ve read the hateful and snarky responses when a fledgling writer asks for advice from other writers. Condescension abounds on writing forums. It’s as if some people need to stomp on others for absolutely no good reason. I don’t understand the need to be mean when another seeks help.

Usually, I lurk in the shadows on such sites —helping when I have a legitimate answer that might shed some light on an issue and watching for answers to concerns that match my own. I wasn’t eager to take a pounding for my own inquisitiveness. Cowardly, I know.

Yesterday on a forum in Social Media Land, though, I made the apparently egregious mistake of asking a question about royalties from Amazon. One would’ve thought I’d asked how many fingers and toes the average human comes equipped with.

I was called a dunce. An idiot. A lazy b*tch. “If you can’t read, then why are you attempting to write?” asked one respondent.

Yes, I knew I was risking the disdain of the elite when I posed the question, but I had read the information on Amazon and was still confused. Clarification would’ve been nice, but in its place I learned that I’m “too dumb to breathe.” I’m amazed I’m still able to do so, but maybe I’m breathing all wrong.

Some people are asses.

In mid-July, our eighteen-year-old grandson, Garrett, was diagnosed with a neuroendocrine tumor following an emergency appendectomy. On Friday, he underwent surgery to resection a portion of his colon and to remove a few lymph nodes.

The surgery went well and his surgeon does not believe that the tumor has metastasized into the lymph nodes. We won’t know for certain, of course, until they receive the pathology reports. At any rate, we feel optimistic.

Garrett has had a rough few days post-surgery. I won’t go into details, but he’s been in a great deal of pain and has needed two blood transfusions. He’s in good hands, but it’s hard knowing he’s hurting and I feel helpless.

It’s been difficult not getting to see him and hug him, but Covid restrictions limit the number of visitors. At least his mom (my daughter) and his dad have been able to be with him. Besides, I’m a hoverer and would likely annoy the heck out of him.

So, I’m here on the sidelines, hanging out with Garrett’s two younger sisters. I’d say I’m taking care of them, but they’re both pretty self-sufficient. The 16 year-old could probably run the country. The nine-year-old could provide the comic relief. Mainly I think I’m here to keep the pets in line.

So far, the pets are winning.

Their family has a terrific support system—my son-in-law’s parents and sister have checked in on us, fed us, and kept us entertained. Neighbors and friends have brought food and vegetables and even a lovely little plant. The little town of Port Byron seems to be filled with caring people.

We appreciate all of the prayers and good vibes. Garrett may require an additional surgery this week; although, we hope it doesn’t come to that. Sorry if this is a bit of a ramble. Just trying to get it all straight in my head.

As I sat on the front porch drinking coffee with my daughter this morning, a hummingbird stopped by to check on us. Today’s the day our grandson is scheduled for surgery and the little bird provided a cheerful distraction.

Please note that I did not take this photo. My photography skills do not extend to shooting photos of hummingbirds; although, I excel at capturing blurs. Lots of blurs. No birds.

Three firsts for me today—becoming stranded on a busy interstate highway, sitting in a police car, and riding shotgun in a tow truck. I sure hope tomorrow is less eventful.

I was only 59 miles from my destination when the car just stopped. One minute I was going 79 mph and the next I was losing speed like a descending rocket. I made it to the shoulder of the road, but just barely. Fifty-nine miles. Too far to walk, and there was a tornado warning involved.

Standing by the side of the busy interstate watching trucks zoom by at 70 mph and cars going even faster on this 90° day in eastern Illinois, I couldn’t help but wonder if those speeding by me might’ve been inclined to stop and help if I were a 20-something hottie wearing short shorts and a halter top instead of a 64-year-old grandmother dressed like a 64-year-old grandmother.

I guess I could flash my boobs, but that would likely get me arrested.

Calling for assistance was interesting. Press 1 for this and 2 for that and maybe 9 for good measure as I sweated in the heat. I carefully ventured outside of my car and leaned against the opened rear hatch so I could get some air.

Then along came Officer Garrett who let me sit in his patrol car while the tow truck was on its way. Lord love him. With his red and blue lights announcing our presence it was less likely that I’d be run over before help arrived.

But the tow truck is here now, so I guess I need to accept a ride from this man I just met. 😳. If you don’t hear from me again, you’ll know I made the wrong decision, (Spoiler: I successfully arrived at my daughter’s home—hot, tired, and in need of hugs and wine—in that order. Many thanks to my daughter, Ashley, Grandpa Tom and Aunt Stephanie who each played a part in my rescue.)

(I know I switched tenses in this post, but it was a trying day.) 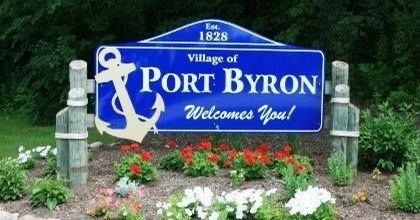 When I close my eyes I picture my destination—a village on the banks of the Mississippi.

I see my daughter and imagine the hug I’ve been aching to give her since early July.

My grandkids. I hear their voices calling, “Nana!” and I’m a rock star for a brief moment in time.

The road stretches before me. Miles of interstate and backroads, small towns and cities. A hotel somewhere between here and there.

Two sleeps separate me from my destination. Tomorrow the journey begins. Illinois, here I come.

We didn’t know his name, this massive, chocolate-colored pit bull. He sat in the reception area of a veterinary clinic with two good Samaritans who’d encountered him on their morning walk. I’m leery of big dogs, but this handsome guy insisted on being friends. His tail wagged like a windshield wiper on full speed, and periodically he’d offer an enthusiastic bark to remind us he was part of the conversation going on around him.

The female half of the Good Samaritan couple gasped. “That’s exactly what I said, isn’t it, Honey?”

He nodded. “Yep, but he doesn’t answer to that. He’s not Roscoe, but he’s been microchipped. We hope they can track down his owners, or at least provide us with a name.”

The four of us, including Not Roscoe, sat waiting—them for an answer and me for my cat, Gracie.

A young man entered the building with measured strides, and Not Roscoe went into observation mode. Where the dog had been clownish and friendly with me, he went quiet, almost respectful of the young man.

Two vet techs emerged from one of the exam rooms carrying a stretcher. They followed the young man to his truck. From my location I could see them opening the tailgate and then gently lifting a German Shepherd from the truck bed and onto the stretcher. I felt tears clogging my eyes as the young man held open the door for the stretcher bearers.

Not Roscoe laid his head on his paws as the stretcher passed by, and a mournful whimper rose from his throat. It was beautiful and chilling. One dog acknowledging the pain and fear of another.

When the young man, head bent, tears flowing unchecked, left the exam room after some time had passed, Not Roscoe ventured a question. But grief was too strong and the young man left without a word.

The Good Samaritan couple petted him and said what every dog longs to hear, “You’re such a good boy.”