Yesterday I wrote about my friend, Rosa’s wedding. Except it was more about me than Rosa and her wedding. Typical, right? Am I a narcissist or just very narrow in my scope of observational abilities. Let’s see if I can do better today.

Rosa is one of the kindest, loveliest people I’ve ever known. She stands all of five feet tall and her smile is like sunshine. Not the glaring sunshine of a summer day in Florida, but that of a warm autumn afternoon when the very quality of light makes one glad to be alive.

When Rosa told me about her impending nuptials I was kind of surprised. For one thing, I thought she was already married. She and her domestic partner of many years, Esteban, have three beautiful children together. Rosa is a devout woman, as well, so the old fashioned Puritan in me was shocked even as the free spirited hippie in me thought, “right on!”

For the ceremony Rosa wore a beautiful, traditional white satin gown with a fitted bodice adorned with lace and embroidered with seed pearls. She was radiant.

Since the ceremony was in Spanish, there was a good deal I didn’t understand, but I believe the priest asked the couple how long they’d been together and why they’d decided to marry after all these years. I’ll have to ask Rosa to be certain, though. I was struck by the personal nature of the priest’s interaction with the couple. It was almost as if the rest of us weren’t there at all. This was no dog and pony show, but an intimate joining of two people.

Well, as intimate as it could be in a church filled to the brim with families with small children. This wasn’t a quiet affair, but one in which the vows were woven in and around a great deal of exuberance and movement.

After the couple was officially wed, the priest led them down the aisle and back up again to joyful music. And the music! Oh my goodness! I knew none of the songs, but they were played with gusto by a mariachi-style band. I had to look to make sure it wasn’t a recording, but there were real live people behind me making music.

Once they were back at the altar the photographer stepped up to take pictures. Of everyone. There were a few standard married couple and wedding party types of photos, but after those were done regular members of the assembled audience stepped forward for photos with Rosa and Esteban. I snapped a few on my phone and said “hi” to a couple of people I knew before heading to my car. Before I made it to the car, though, Rosa’s eldest daughter caught up to me and said Rosa wanted me in one of the pictures. That was pretty sweet. I wish I’d thought to have someone snap the picture on my phone, but you’ll just have to take my word for it. 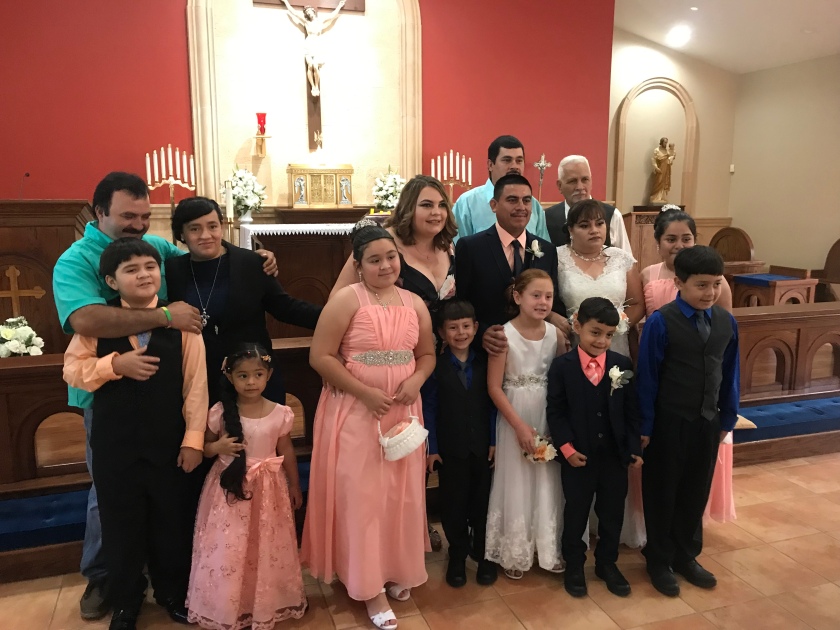