I’m an avid Words With Friends player. At any given time I’ll have a dozen or more games going on with people I actually know and with others that I know only through Facebook or blogging. Some of my favorite opponents are those with whom I have only an internet relationship.

Lately, however, I’ve been inundated with opponents, who I learn after we’ve each played a few words, are only there to flirt or are in search of a more intimate relationship. Granted, given the opportunity they might only be interested in scamming me out of money, but they always start out by being curious about me. With these players I’m firm. I’m there to play WWF, not chat. If they continue to try and worm their way into my life I’ll ignore them until they either resign or give up. I’m not taking a loss in a game because of their poor behavior.

Here’s how one guy tried to get stuff started: 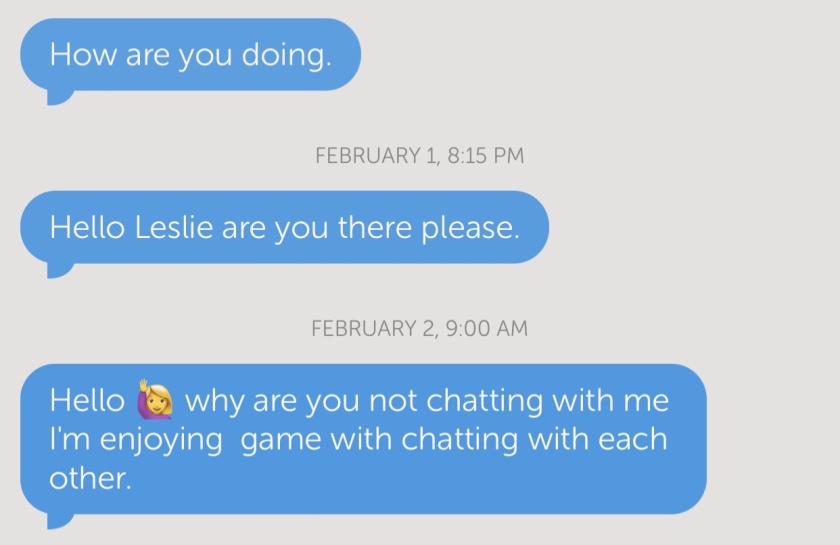 Chances are he’s not a native English speaker, even though his profile shows he lives in Wisconsin. The grammar is too odd.

After I told the guy that I would not chat and that he was free to resign, I got this:

Creepy, right? I figured out after this how to mute chat on the app.

I just wonder what has changed to bring all these pervs to my virtual door seemingly at once. I’ve played WWF for years without being harassed until just a few weeks ago. Now I might get five new weirdos a day clamoring to chat. I’ve stopped accepting games now from folks I don’t know outside of the game. And that’s a shame because I have had so much fun getting to know others who enjoy WWF.

21 thoughts on “Words With Pervs”

My Tweets
Here There be Poems