You know how Facebook reads your posts and all of a sudden your feed is magically filled with content that is in some way related? I’m hoping you do, because if it’s just me that happens to that might creep me out.

Anyway, after I returned to Hurricane Michael ravaged Florida from Texas I posted on FB that I was looking for opportunities to volunteer in some way. Voila! Within mere minutes a post seeking volunteers for storm relief miraculously popped up. The group, Operation BBQ Relief, made it easy to sign up.

As soon as I’d answered a few simple questions their website told me I’d be contacted with a place and time to volunteer. I kept checking my email and text messages all Monday evening, but hadn’t heard anything by the time Studly Doright and I went to bed last night.

First thing on Tuesday morning, though, I saw that during the night I’d received three emails. The first one told me I’d been “deployed” to help on Monday morning the 15th. Hmm. That boat had sailed. I figured better late than never, though, and hurriedly dressed to drive into Tallahassee. The second email just told me what to wear and where to go, and the third told me I’d been okayed to help. I might’ve read them out of order, but I figured everything out.

When I arrived at the staging site around 7:30 a.m., things were already hopping. I signed in, got a hat and a name tag and tried to find my niche. I hadn’t been there long when a man with an official looking t-shirt on tapped me on the shoulder and asked if I knew of a laundromat in the area that would pick up and drop off clothes. I’d just been to the closest one a couple of days ago and knew they weren’t doing that at this time. One would think this would be THE time for such services, but what do I know? I volunteered to take the items and launder them. Soon, I had a large trash bag full of gloves, dish cloths, and aprons. I was cool with being the laundress. Once everything had finished drying I hurried back to see what other tasks were in store.

Basically, OBR prepares, cooks, and packages foods to be picked up by groups like the Salvation Army and local churches. These groups deliver to places without electricity and water. One of the team leaders told me that even yesterday they spoke with local folks who hadn’t had a meal since the hurricane hit last Wednesday.

I found myself packaging and labeling items such as red beans and rice, peas and carrots, and bbq beans. The meats were handled by a separate crew–those with food handling certification. As volunteers packed items, trailers pulled up to be loaded. Everything was well organized and efficient with permanent team members directing volunteers of all ages, sizes, and ethnicities. What an experience!

At lunch time, they fed us an amazing lunch. The country group, The Zac Brown Band donated the services of their huge kitchen trailer and a cook to feed volunteers. I got a quick tour of the trailer. It’s like a chef’s dream.

After working until two p.m. on Tuesday everything on my 62-year-old body hurts, but if I am able to walk on Wednesday morning I’ll go back to work again. It felt good to know we were there to help. Here are a few photos I took during some downtime.

One of the volunteers wrote little love notes on the box lids: 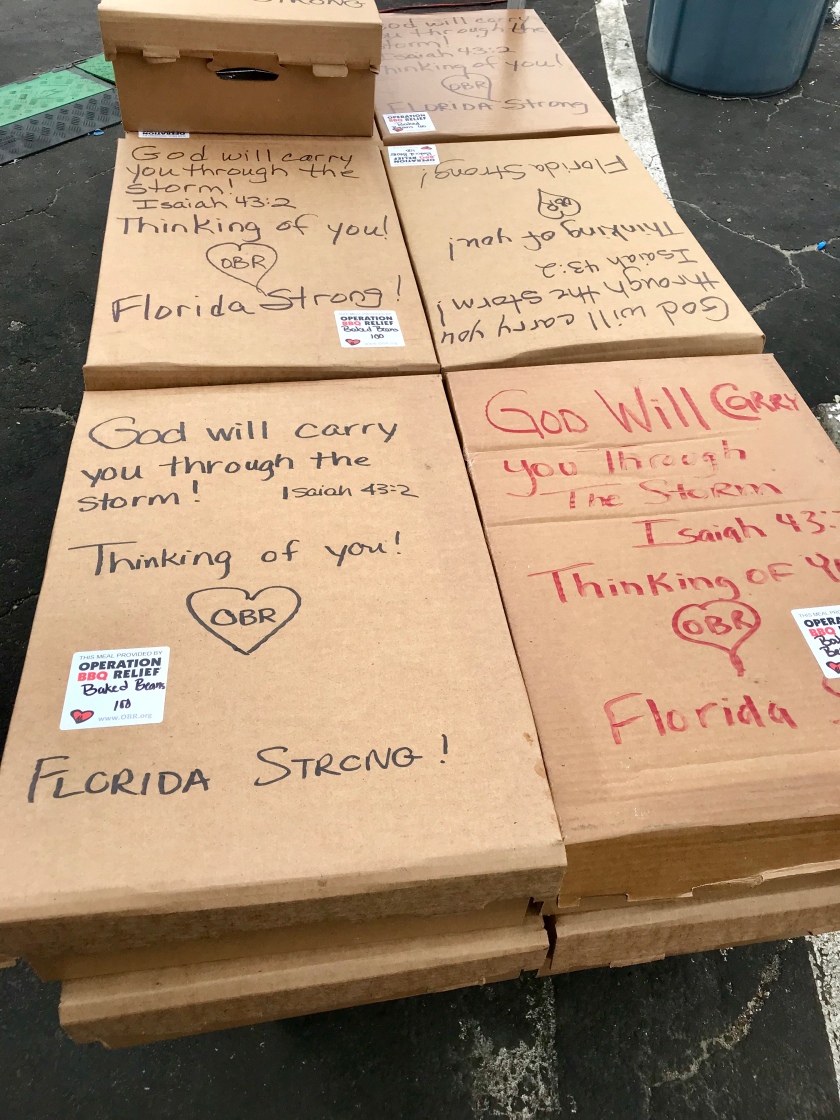