Ashley and I made our national television debut yesterday. For one brief moment we were caught on camera during a live CBS sports broadcast in downtown San Antonio. Ashley’s middle child took a screenshot of our appearance and texted it to her mom. I’d love to say we were models of beauty and grace,

but we were closer to being doubles for dumb and dumber. What can I say? Every time I see the photo I collapse in a fit of giggles. My hair. Ashley’s expression. Priceless.

I still don’t have my voice, so I text Ashley anything important I need to say. As I write this we are sitting outside listening to live music on Saturday evening at a venue filled with Michigan fans.

What fun we are having! Thanks to the Stewarts for putting their tickets up for sale, and thanks to my Studly Doright for buying them even though he couldn’t attend. Thanks to Ashley for saying “yes” to joining me, and thanks to Ashley’s husband for agreeing to be the sole Easter Bunny at their home this year so Ashley could join me, as well. 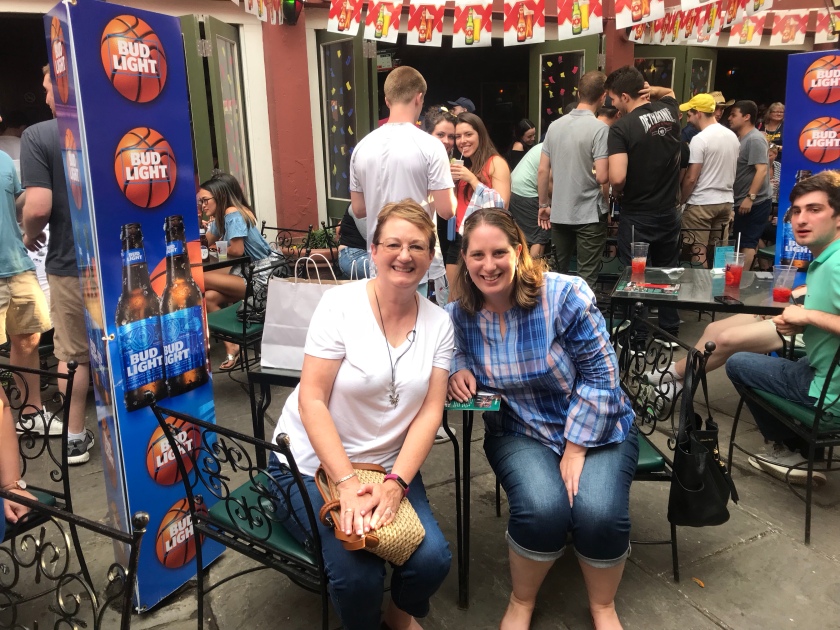 We’re still bummed that the Jayhawks lost so badly to Villanova, but there’s always next year. Might need to start making plans for Minneapolis.

12 thoughts on “A Moment in the Spotlight”

View from the Back