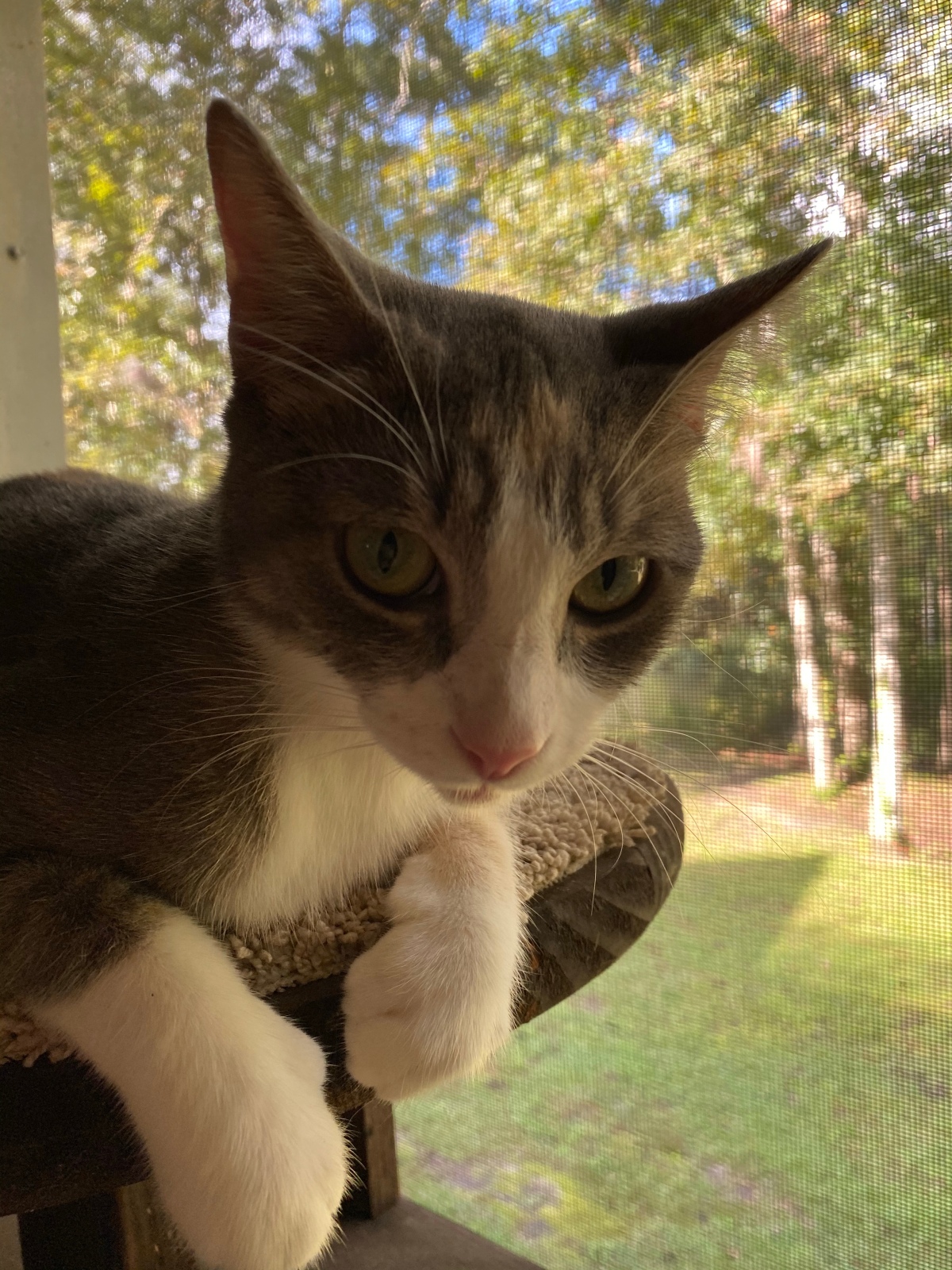 Lately I’ve felt overwhelmed. Between our crazy political situation, the virus that never ends, being separated for way too long from my children and grandchildren, and the heartbreaking loss of our beloved kitty, Scout, I’ve been tempted to just go to bed and not get up until life feels worth living again.

My husband, Studly Doright has always been a “glass that’s more than half full” kind of guy, but he has been devastated by Scout’s death—so much so that he seriously considered dropping out of a golf tournament. That’s just unheard of, and he finally decided he’d go ahead and play because other golfers were depending on him.

Yesterday morning, before he left for the tournament he kissed me goodbye and with tears in his eyes said, “We really don’t want to live in a house without a cat, do we?”

I could only shake my head.

And so I did. Meet Gracie:

This precious rescue kitty was languishing in a showcase at PetCo when we first met. When I spoke to her she stuck her nose through one of the holes and said “hi!”

Now, she’s keeping me company on the sofa.

Gracie is just over a year old and came to a local shelter as a pregnant feral cat. After her kittens were weaned, each one found a home, leaving Gracie on her own in the shelter.

She’d been adopted twice, and returned both times. The first family discovered that their child was allergic to cats, the other family had a dog who felt threatened by her. We’re her lucky third chance.

Gracie is doing well here at Doright Manor, but we can tell she’s a bit reluctant to go all in. And who could blame her? She really likes our screened-in back porch, and spent much of the evening perched on the cat tree Studly made for Scout.

When we turned in for the night she sat at the foot of the bed watching us for a long time. Studly tried to coax her to come closer, but she snubbed his efforts. I thought maybe in a week or so she’d feel comfortable enough to snuggle with us.

But I woke up around one a.m. and her sweet little face was just inches from mine. She’d curled up next to my head and was so deeply asleep that she didn’t even twitch when I extricated myself from the covers to make a trip to the bathroom. When I returned and slid back into bed she opened one eye as if to say, “Make up your mind, lady.”

I must admit to feeling like we rushed into adopting a new cat so soon after losing Scout. There was a moment of panic after I’d paid the adoption fee and realized I was now in a committed relationship with this little girl. But, Studly was right. I really don’t want to live in a house without a cat. And magically, I feel like I have a reason to get out of bed again.

46 thoughts on “A Beautiful Day in the Neighborhood”