Oh, friends, I have had my eyes (and ears) opened to my limitations as a singer. Not that I ever considered myself a person of any great vocal talent, but honestly, I never dreamt I was as awful as I turned out to be.

Before I go any further, I need to thank anyone who has ever listened politely as I bleated out a song from a karaoke stage. Bless you all for your patience and diplomacy. Truly, I thought I was carrying a tune. As it turns out, I seem to have been carrying a screeching cat all these years.

What precipitated this moment of clarity? Did someone tell me how awful I was? Was I booed from the stage? Nope. In fact, when I sang a karaoke version of Jolene on Friday night at AJ’s in Nashville, Tennessee, I received a standing ovation. Okay, to be fair, everyone was already standing anyway, but hey, the crowd was simultaneously standing and clapping, so that’s going in the books as a standing o.

The revelation of my total lack of musical talent came on Saturday afternoon as three of my friends and I toured the historic Ryman Auditorium in downtown Nashville. As part of the tour one can stand on the famed Grand Ole Opry stage to pose for a picture. I’m the tall one in the back there, surrounded by my friends, before discovering my absolute inability to hold a note for more than about two seconds. Look how confident I seem here. 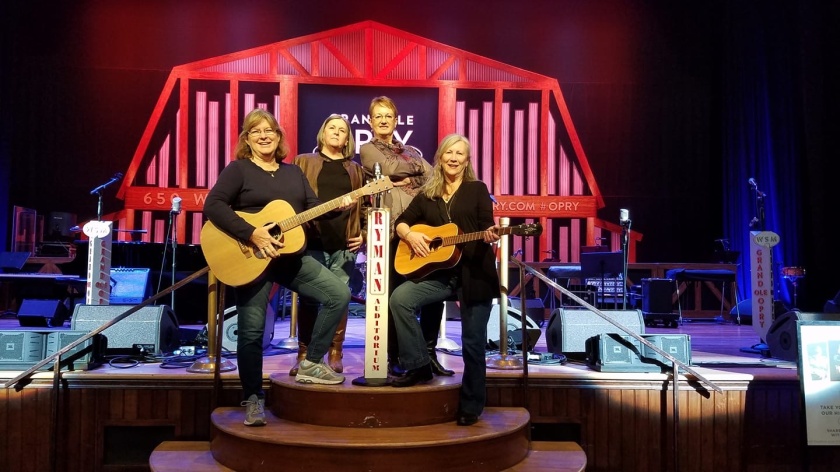 As part of the tour one can record a song in a studio. Well, having experienced that loving affirmation from the crowd on Friday night, how could I resist having my voice immortalized in a recording? Why would I deprive the world of my dulcet tones?

The experience was wonderful, though. The sound engineer, Dave, welcomed us into his booth even though technically the sessions for that day had ended a few minutes before we discovered the studio area. It was great fun, yet daunting, to stand in front of the microphone wearing headphones that allowed me to hear exactly what I sounded like.

With a quick look through the catalog I selected King of the Road. Now, I’d never sung Roger Miller’s iconic hit outside of my shower or my car, but how hard could it be?

I struggled mightily. My excuses are numerous: I was nervous. I forgot to breathe. The song wasn’t in a good key for me. I hadn’t practiced. Hey, it was my first time! And on and on. Basically, though, I finally realized that I’m a much better tree climber than a songstress. And friends, I couldn’t climb a tree to save my life.

If I can figure out how to share the song file with you I’ll do so. I warn you though, avoid drinking hot liquids if you risk listening.

By the way, if anyone wonders if my days of singing in public are over…Hell, no. I might be bad, but I’m really good at being bad.