A few days ago my car was rear-ended as I was driving home from the happiest place on earth. No, not Disney World–Target. One second I was singing along with Chris Stapleton on the radio; the next second I had a Toyota Corolla lodged firmly onto my trailer hitch.

I was stopped at a red light behind a small truck and at least one other car. In my rear view mirror I saw the Toyota driver’s face as he realized that traffic in front of him was stopped, and that he could only slow down enough to lessen the impact, but not enough to avoid hitting my car. I firmly believe he’d been texting or looking at his phone, looked up to see a green light, but didn’t realize that traffic hadn’t moved yet. I’d been tapping on my brakes, so if he’d been paying attention, he’d have seen them.

The accident could’ve been much worse had I not been braced for impact and able to keep my own car from ramming into the truck ahead of me when the Toyota hit me. That’s why I NEVER text when I’m the driver, not even when I’m sitting at a stop light.

Since the accident I’ve been waking up in a cold sweat, reliving the moment that he hit me, only in my dreams I’m on my motorcycle instead of in my car. And I die. Smashed between the truck and the Toyota.

I told Studly Doright that I think my motorcycle riding days are over. Distracted drivers, obsessed with getting in one more text or looking at one more photo, are so common that I just don’t want to put myself in that position. Maybe that’s cowardly of me, but I don’t know how else to make those dreams stop.

Peace, and put down the phone, people. 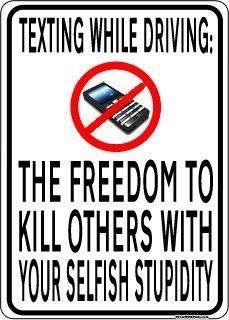 My Tweets
Story Writer
Life is a rusty rollercoaster