Isaac Newton’s first law of motion, also known as the law of inertia, states that an object at rest will stay at rest and an object in motion will stay in motion with the same speed and direction unless acted upon by unbalanced force.

Even though I once taught science to students in fifth and sixth grades I’d never paused to ponder just how Newton’s Laws of Motion applied to dog walking until this morning.

Last night I’d told my son, Jason, and my daughter-in-law that I’d rise early and take Toby, their elderly, furry, coffee table-sized dog, for a walk so they didn’t have to before leaving for their respective jobs. I figured it was the least I could do since they’ve put up with me for nearly a week now.

Toby and I got off to a great start. Jason had already helped him down the steps to the backyard. When I went out Toby was joyfully rolling in the wet grass, so all I had to do was hook the leash onto his collar and coax him through the gate. There was a brief hiccup when Toby saw Jason’s pickup truck pulling out of the driveway. He really wanted to go with his favorite human. 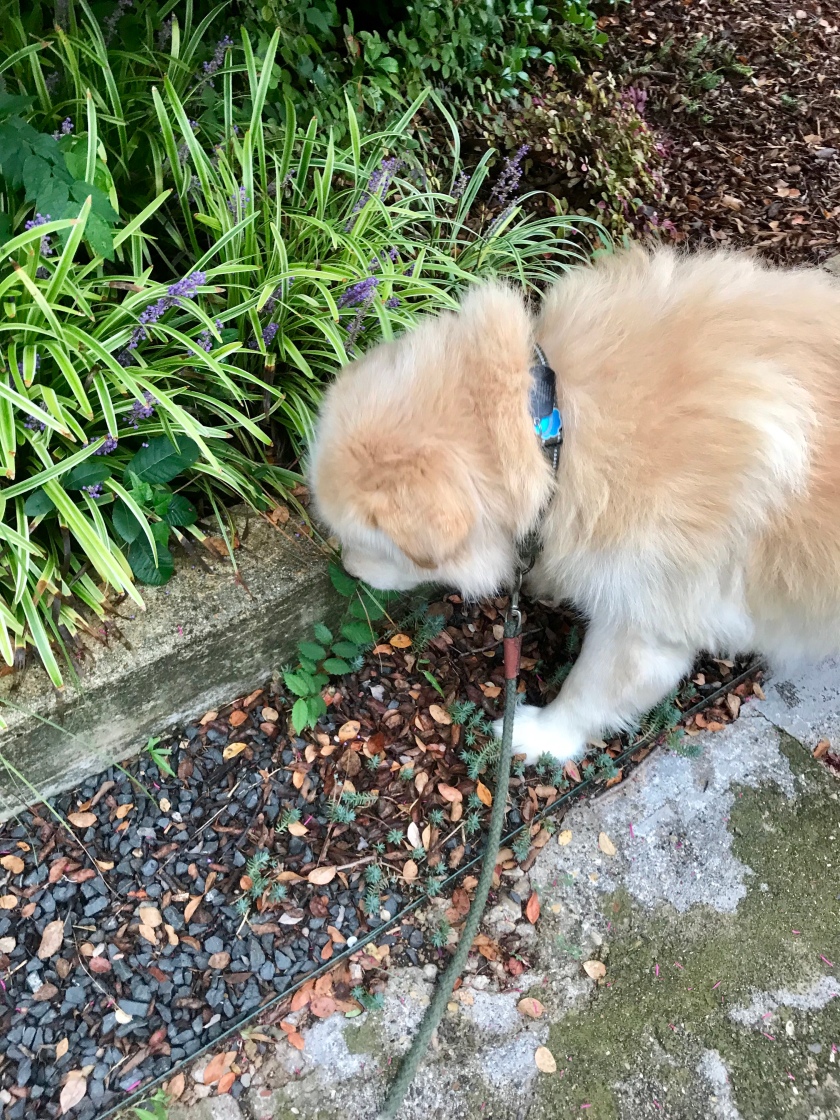 After Jason was safely gone, I allowed Toby to find his path, and he set a slow pace along the sidewalk. When one walks Toby, it’s more of a shuffle than a stride. The goal, of course, was to get him to poop, so when he slowed down even further and began avidly sniffing around a bush I got the poop bag out and was ready to clean up after him. I didn’t realize it wasn’t pooping he had on his mind.

Toby might be old, half deaf, and arthritic, but when a cat shot out from under that apparently delicious smelling bush he quickly went from being an object at rest to being an object in motion. As for me, I became an unbalanced force. By some miracle I kept a firm hold on the leash and applied some energy to keep him from escaping into the yard where I now realized multiple cats were lounging about.

With more nimbleness and agility than I believed I possessed, I managed to insert myself between Toby and the cats, applying an equal and opposite amount of force until he realized resistance was futile. Whew! For a brief moment I knew the whole situation could’ve gone sideways. Lucky for me, Newton’s Laws held true.

We continued our walk, and Toby found a suitable pooping spot. Now we’re safely back in the house where he’s chasing cats in his sleep. I’m pretty sure Newton’s Laws don’t mean a thing in his dreams.

Virginia Belle
View from the Back