Based on predictions that tropical storm Nestor would bring buckets of rain and high winds to the Tallahassee area on Saturday, Studly’s golf course closed for the day. I envisioned a lazy afternoon of watching college football while snuggling on the sofa with him and the cats. Studly, on the other hand, envisioned driving to Gainesville, FL, to look at, and perhaps purchase a motorcycle. At least he invited me along for the ride.

When we left Tallahassee   the skies were threatening. 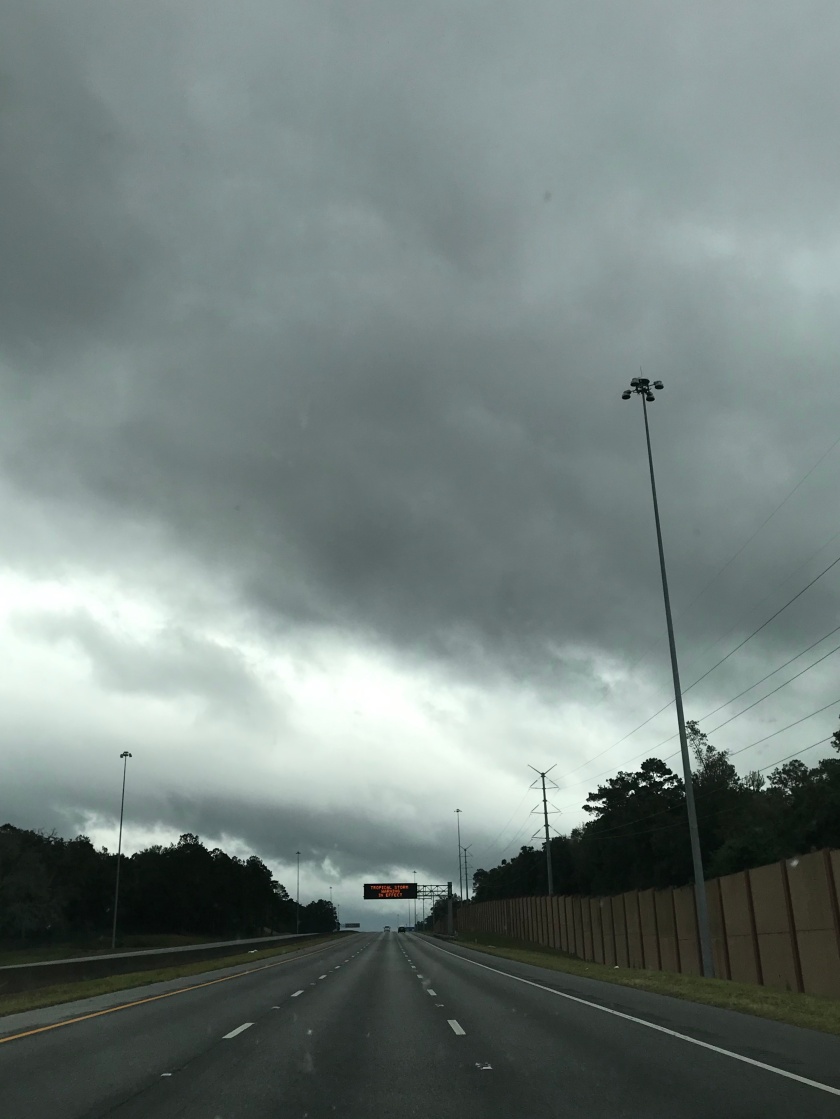 The winds hadn’t begun blowing yet, but I certainly questioned Studly’s sanity in his decision to travel so far from Doright Manor and into the belly of a storm.

“Relax,” he told me. “It’s not going to hit until this afternoon.”

As it happened, he was right. What’s that old saying about even a broken clock having the correct time twice a day? I think that applies here.

Gainesville is about a two and a half hour drive south and East from our home, and thanks to gps we easily found the place where the motorcycle was being stored. Within a few minutes the bike was loaded into the back of our pickup truck, and we were headed home.

We were both ready for some lunch, and while Gainesville has hundreds of restaurants we opted to drive north to Alachua. I’d never been there, but Studly promised that the little town had a terrific Main Street with several good cafes. He was right again! I’m going to have to start reconsidering that broken clock analogy.

We ate at Conestogas Restaurant where everything seems to be fried, and vegan options were practically nonexistent. 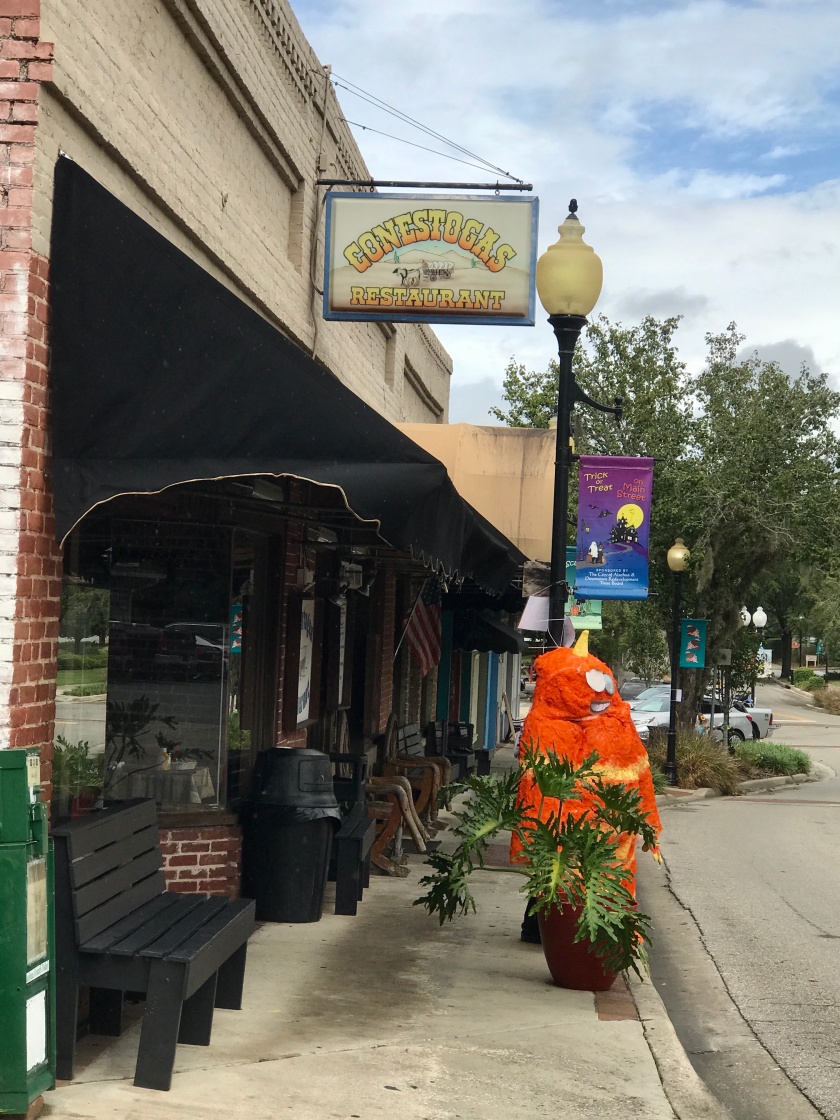 I had a baked potato stuffed with bell peppers and grilled onions, along with a salad, while Studly enjoyed a chicken fried steak with gravy. Obviously he wasn’t concerned about the lack of vegan fare.

After lunch we walked along the street, and inspected the town’s Halloween decorations. It didn’t take us long to discern this year’s theme: 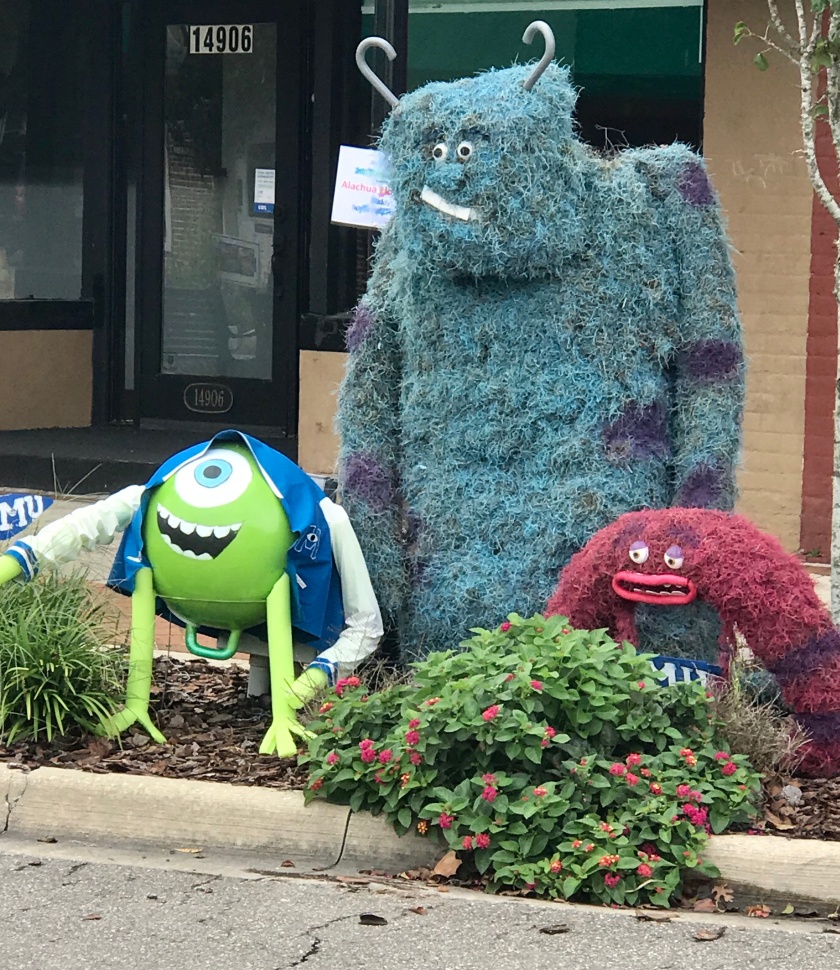 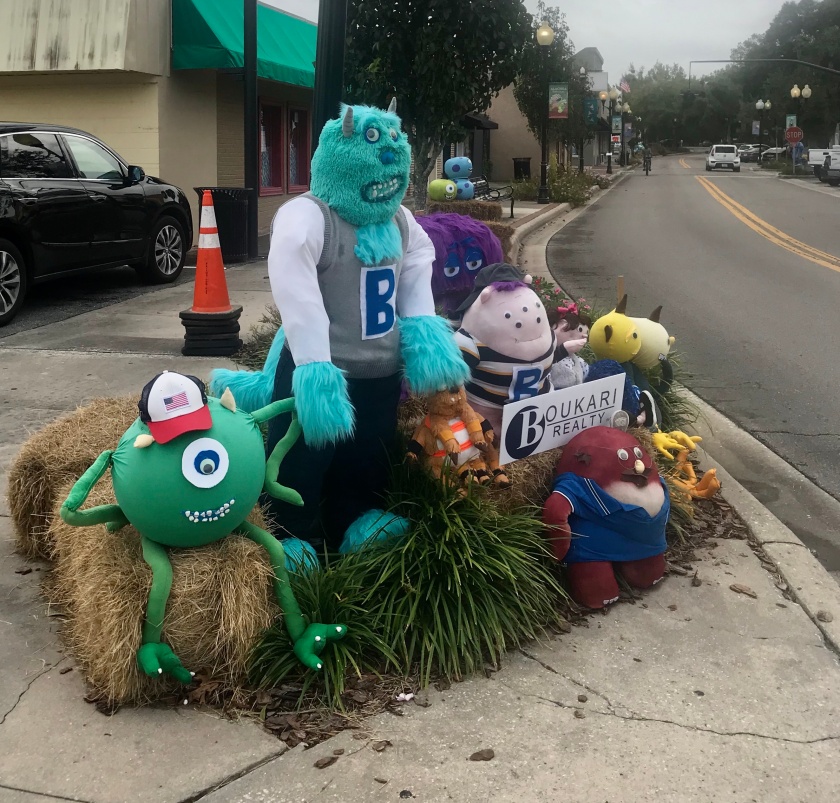 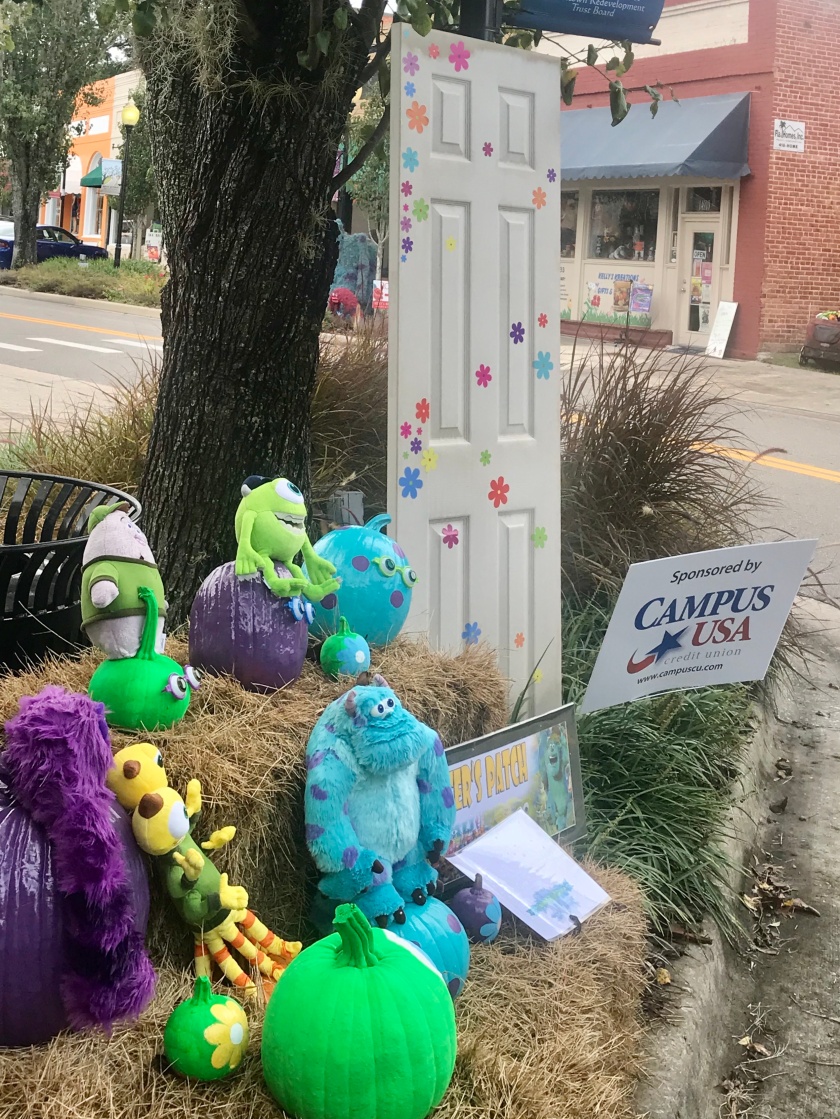 On nearly every corner we encountered characters from Monsters, Inc. If there’s a contest for best design, I vote for the one directly above. The door clinched it for me. Studly, who’s never seen Monsters, Inc., wondered aloud why the door was part of the display.

“The door doesn’t seem all that scary to me,” he observed.

Of course I had to fill him in on the importance of collecting screams and the implications of having a human child follow one of the monsters back through a door.

Still he asked, “Couldn’t they at least have painted the door orange and black and put spiderwebs or something on it instead of flowers? That would be scary.”

“But that’s not how the door looked in the movie,” I said.

Sometimes I feel like I’m conversing with a tall toddler.

There were a few non-Monster, Inc. themed decorations, as well: 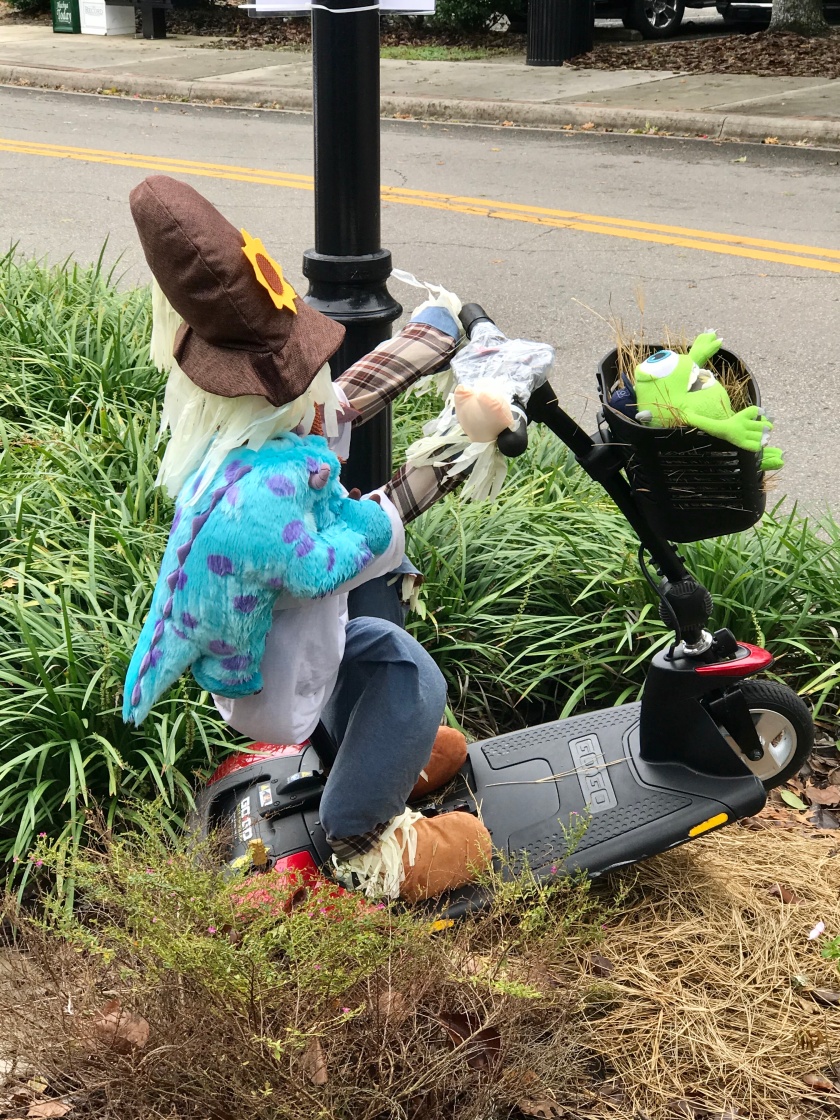 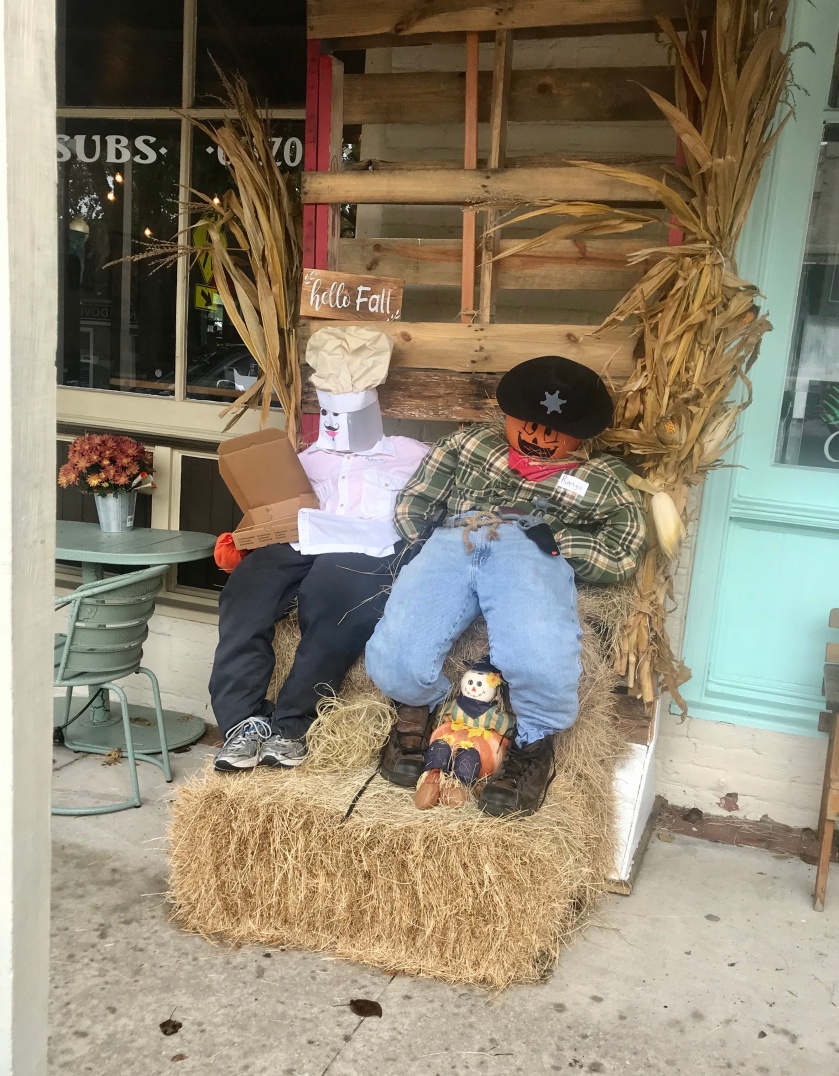 Perhaps those in charge of decorating these storefronts had never seen Monsters, Inc. either.

After our walk we continued the drive home, encountering heavy rain just as we neared Tallahassee. We’ve needed the moisture, so tropical storm Nestor did our area a favor. Studly and I spent the evening watching college football and snuggling, so I got what I wanted out of the day, as well. That’s a win-win, right?