As far as I know my parents weren’t terribly politically active. They always voted, but I never heard them declare for one party or the other. They tended to vote for the person and ignore party affiliation.

Now I do recall their amusement when, as a fifth grader, I campaigned for Richard Nixon in the R.C. Andrews elementary school mock election. Texas was still primarily a Democrat leaning state back then, so my choice cast me as a bit of a rebel. Apparently, I was ahead of the pack in supporting the GOP candidate. I sure hope I’m not the reason that Texas is a red state nowadays. That’s a burden I’m not sure I could bear.

My mom died more than two decades ago, in late October just after I turned 39. She wasn’t old, but younger than I am now. She’d lived her entire life in Texas. Her peers are now in their late seventies and early eighties. Many have been brainwashed by FOX news and believe that Donald Trump was selected personally by God almighty to be president of the United States, while a few have maintained the dignity of independent thinking and have a healthy skepticism regarding 45.

It bothered me for a while to think that had mom lived into her 80’s she might have succumbed to the FOX News propaganda machine. However, I recall several pieces of evidence that indicate Mom would not be a Trump supporter:

1. She was never a Ronald Reagan fan, even when much of the country was mesmerized by the former actor. Early on she warned me that he was capable of exerting great harm on the country. She had never trusted Nixon either.

2. Mom worked for Planned Parenthood in the mid-70’s and firmly believed a woman should be the final decision maker in matters concerning her own body.

3. My mother was wary of organized religion. She had no use for the likes of televangelists, always scornful of their dramatic public prayer that was more about garnering dollars for their private coffers than about caring for the poor. Mom’s beliefs were private, and she didn’t need to attend a particular church to be a good Christian.

4. She taught me to think for myself, to weigh the good and the bad, and to make informed decisions. And trust me, she could smell a lie from miles away.

Who knows what the years might have wrought? But I’m fairly sure Freida Hall would’ve told Trump to kiss her ass. If she were still living, we would do it together. 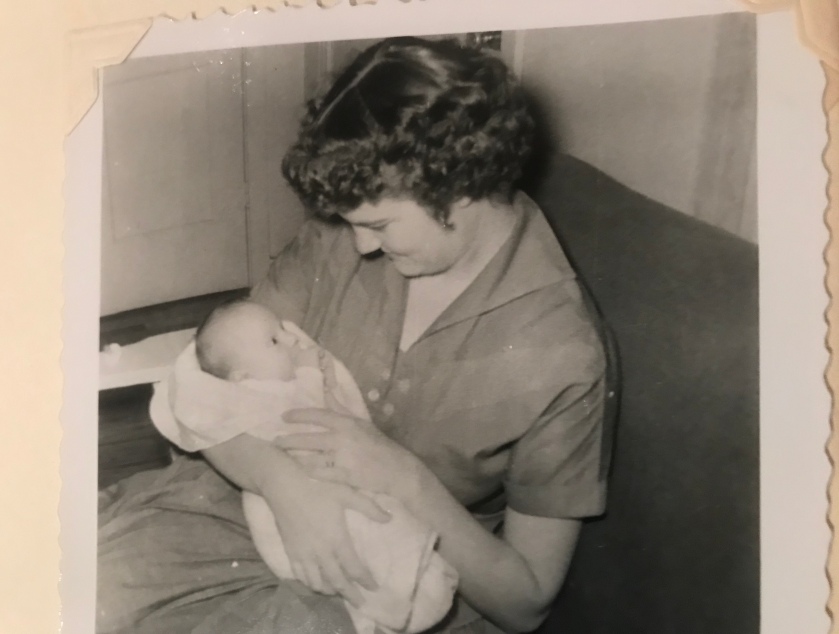 That’s Mom holding baby me. Well, it might be me, but I’m certain that’s my mom.